The Princess Trap by Talia Hibbert 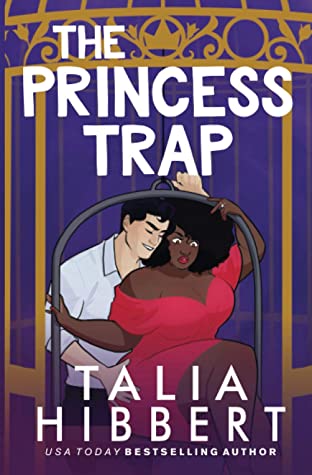 This is my second book by Talia Hibbert and it definitely won't be the last. That said, as with the other book of hers I read, it ended up falling just short of being something I really, really enjoyed. THE PRINCESS TRAP is pure fluffy self-indulgence, featuring a bisexual prince with a kinky side and a plus-sized, confident heroine who knows what she wants, when she wants it. And that something is Prince Ruben-- only, she doesn't know he's a prince until they are caught by the paparazzi whilst engaged in what the experts call "hanky-panky."

Then it all comes out. Ruben is the younger prince of a made-up Scandinavian country and he's recovering from a big scandal that had been cooked up by a malicious ex. In a moment of panic, he told the paparazzi that Cherry (our heroine) was his fiancee, but now that means being summoned back to his country, with Cherry in tow, to explain himself to his cold-hearted older brother and sister.

So things about this book I liked. Cherry, obviously. I stan me a confident heroine who has a good job, doesn't let people get her down, and stands up for those she loves. I liked Ruben-- at least, in prince-iple. He was a good guy Greg, for the most part, and while I wasn't exactly crushing on him, I could see why Cherry did. I also liked the slightly darker elements in the storyline, dealing with things like vengeful exes and abuse. It's also kink-positive and consent-driven, which will appeal to a lot of readers.

Things about this book I didn't like? The names. I felt like I was reading about someone's lunch. I kept mentally calling Ruben "Prince Sandwich," and there's a ton of jokes in the book about Cherry's name. I think if it were just one or the other it would have been fine, but because they were both food, it was very distracting. I also didn't really like the sex scenes. Consent can be sexy but it felt way too much like an annoying pop-up here (Continue? YES NO). Also, even though I stan me a dominant man, Ruben's constant nicknames and some of his dirty talk didn't ring my bell so much as knock the bell off its tower and send it flying into the neighboring county of Nopeville. Finally, and this is a complaint I think I share with a lot of reviewers, the tone and pacing are a bit off. It goes from fluffy-sweet to quite dark and serious, and then it ends all happy again, which makes it feel back-heavy. The connection between Cherry and Ruben wasn't bad, but I wish there was more emotional connection. It felt like a lot of their connection was through sex, and then suddenly boom, they're in love.

Despite these complaints, I did like THE PRINCESS TRAP. I think it feeds into that hankering that a lot of us adult readers still have for princess media, whether it's Disney or the Princess Diaries. And we all need a bit of fluff now and then to get us through the harder things, even if it sounds like lunch.