Passions of the Ghost by Sara Mackenzie 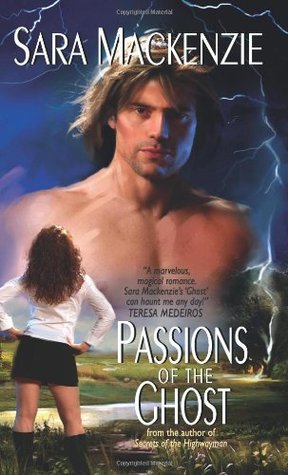 I've been downsizing my book collection (and documenting this painful process on Instagram), which is why I've suddenly started reading a ton of old romance novels again. Also, I missed them. This book came in a romance mystery box and the cover was so hilarious that I think I laughed for a solid minute when I unboxed it. The fact that he looks like Sam Claflin and he's just LOOMING on the horizon with all that lightning and the chick looks like she's flashing the man vision is just too much.

At first, I was kind of into the story. It reminded me a bit of Jude Deveraux's A KNIGHT IN SHINING ARMOR. Reynald is bonked into the future by an enchantress to right past wrongs. He is a Norman who thought he was making peace with the Welsh but apparently something went wrong and the answers to that lie in the present... I guess?

So things I liked about this book: the heroine, Amy, isn't a virgin but it's implied that the hero is (for a reason that's actually really sad and believable). She and her brother are con artists with an abusive childhood. Reynald is a hot warrior dude and he is the perfect blend of chivalrous and macho. Also, it's freaking hilarious that his castle is turned into a sort of Medieval Times hotel in the future and he is so unbelievably offended by that.

Things I didn't like about this book: it got a little too silly, and not in a fun way. Like, the sorceress bit, I was willing to buy because there was a similar plot in The Visitors (one of my favorite movies; it's a French film and it's fucking hilarious-- look it up). But the thing about the dragons was a bit much. What are dragons doing in this time-travel romance? PLEASE EXPLAIN. I also started to think it was a little, um, boring. Delightful passages from the female gaze aside, there just wasn't much chemistry between the hero and the heroine, and I need that to really enjoy a romance.