In Every Mirror She's Black by Lola Akinmade Åkerström 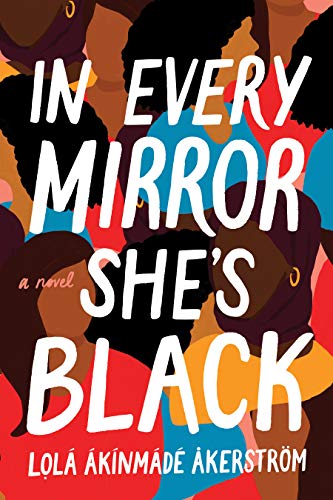 This was recommended to me by one of my friends because I liked THE OTHER BLACK GIRL. It tackles similar concepts, such as institutionalized racism and micro-aggressions, but this book is primarily set in Sweden, so it's more of an insight into the difficulties that Sweden, as a country, faces with regard to immigrants, diverse work forces, and attitudes towards interracial relationships/families.

There are three narrators in this book: Kemi, a Nigerian-American woman who works in marketing and has been recruited to a big Swedish company following a highly publicized moment of cultural insensitivity; there is Muna, a Somali immigrant living in Sweden (I believe she is a refugee), first in a detention center and then in what I believe is gov't subsidized housing; and then there is Brittany-Rae, a Black American ex-model and current flight attendant who catches the eye of a Swedish multi-millionaire and becomes his trophy wife.

IN EVERY MIRROR SHE'S BLACK takes a lot to get moving. At first I considered DNF-ing but I did end up finishing. Each narrator is totally different and I liked how they all faced a unique set of problems and had such distinct personalities. I also liked the author's voice for all these women and the way she offered insights into social issues of Sweden. I was less keen on Jonny and the ending for all of the characters but Kemi. It ended up being quite a depressing book, and I don't want to say too much about that because, you know, spoilers. But don't read this on a bad day.

Overall, I did like this book and I'd recommend it to people who would be interested in seeing how racism looks in other countries and who enjoy intensely dramatic reads that don't necessarily end happily for all the characters. I wouldn't read this again but I'd read more from this author.