This Is Just My Face by Gabourey Sidibe 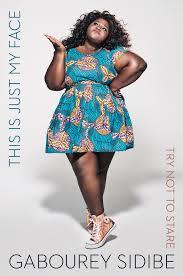 This is one of the best celebrity memoirs I've read recently and I'm shocked more of my friends haven't read it. Gabourey Sidibe is most famous for her titular role in Precious, but her recent projects have been American Horror Story and Empire. Before she got into acting, though, Gabourey (rhymes with cabaret) led a truly fascinating life, which is honestly worthy of being a movie in and of itself.

In THIS IS JUST MY FACE, Gabourey talks about her family dynamic. Her African-American mother married her Senegalese father to get him a green card and he implemented some pretty strict discipline in their household. Then he actually went back to Senegal and married his cousin, which her mother tricked her into revealing by asking whether their child together was illegitimate (apparently a huge insult in Senegal). Her stepmother, Tola, ran a psychic business in Gabourey's younger brother's bedroom when they all lived together, and hilariously, she even predicted Gabourey would be famous.

Some other things Gabourey talks about in her memoir are her stint working at a phone sex hotline, her love-hate relationship with social media (especially Twitter but also social media in general), what it's like dealing with relatives coming out of the woodwork when you become famous and how they always assume that you're richer than you actually are, her struggles with an ED and her later decision to get bariatric surgery-- not to look better or fit in with conventional beauty standards, but to be healthier, and her truly relatable experiences with depression and anxiety.

I loved this memoir so much. I loved her conversational style of writing and her funny sense of humor, her (mis)adventures with Senegal, her frank discussions of fame and mental health, and basically all of it. The only thing I didn't like is this one chapter where she writes about going to a film festival that is filled with effusive praise for Lena Dunham (I really don't like Lena Dunham), but thankfully she only makes up a small part of that chapter and isn't mentioned anywhere else. Literally everything else in this memoir is gold and I'll definitely be recommending it to all my friends.