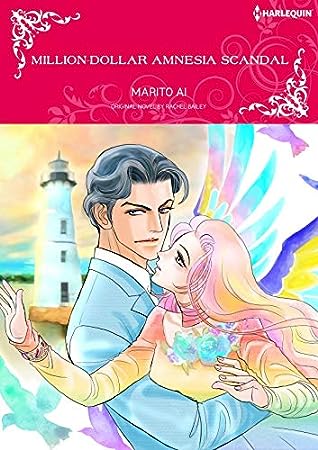 I think we can all agree that MILLION-DOLLAR AMNESIA SCANDAL might be the cheesiest, best title there is. I went into this book expecting something truly ridiculous, eye-rolling monocle at the ready, so you can imagine my surprise when this book railroaded my emotions with a surprisingly sweet and emotional story that had no douchebaggery, no OM/OW drama, and no psychopathy. WHAT.

Marito Ai is one of my favorite mangaka and all of her adaptions have been absolutely amazing. I don't know if Harlequin lets the artists choose which stories they want to work on, but all the ones Ai does have been unfailingly good and this one is no exception.

The story is this: April is a talented jazz singer with amnesia. In the car accident that gave her the head trauma, she was riding with the son of a billionaire hotelier who had just taken over her record label in exchange for ownership of the Lighthouse Hotel, a luxury seaside hotel with a big old lighthouse. Obviously, her mother/ex-manager and the brother of the hotel guy are angry and both of them want her to sign a document voiding the deal, but April refuses to sign anything until she gets her memories back because she wants to know why she made the deal.

The brother, whose name is Seth, isn't actually a bad guy, and so when he starts to feel attracted to April, there is not one iota of creepiness. In fact, he takes her out on a boat and they have sex together for the first time under the stars, and the way it is drawn and written is so beautiful that I actually had an ~emotional moment~. Seth's biggest problem is that he's an illegitimate son so he has all these emotional hangups when it comes to love because he saw firsthand how it fucked his mother and younger brother over, but it hasn't turned him into a douchelord. He's just emotionally cagey.

A lot of the time when I read these things, people behave in ways like if an alien was told about what people do when they're upset and was like beep bloop blorp, I shall do the human thing. And then wrote that. Which usually leads to me swearing at my Kindle and/or laughing hysterically and asking myself rhetorically (and sometimes you guys, also rhetorically), "WHAT THE FUCK IS GOING ON." This is one of the few contemporary HQN romances I've read where I actually understood or agreed with all of the characters' decisions and liked all of the characters, including the secondary cast.

If you like sweet romances with just the right amount of angst and drama, this is your jam, baby.