The Weight of Lies by Heather Crews 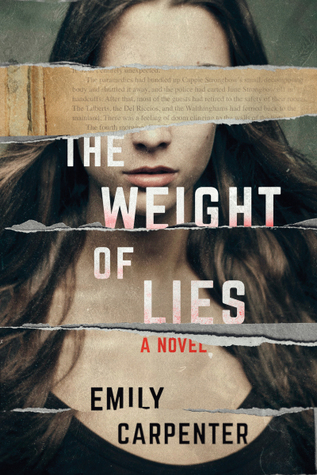 THE WEIGHT OF LIES is a fabulous book that pays homage to the 70s Gothic genre while also being its own creepy thing, and someone should definitely make it a Netflix mini-series. I've been reading Emily Carpenter's books with my good friend, Heather, and this is the third book of hers we've read together. I actually think it's my favorite because it combines so many of my favorite tropes.

Megan Ashley is the daughter of an incredibly famous novelist who was basically a bloodier, more violent version of V.C. Andrews. Her most beloved work is a creepy cult classic: the story of a girl named Kitten who lives in a creepy house on a creepy island and eventually goes cray-cray and starts killing people, as basically every creepy little girl in every creepy work of 70s fiction did.

Megan did not have a good childhood though. Fame went to her mother's head, basically fueling her narcissistic tendencies, and for a while Megan escaped into party culture before kind of burning out and settling for relative obscurity. Which is why she's surprised when she meets her mother's now ex-agent and he claims that he wants her to write a book of her own, a big tell-all that delves not just into her childhood but also into Kitten.

Megan goes to Bonny Island to meet the woman that inspired Kitten, Dorothy Kitchens, who runs what used to be a B&B on land that used to be owned by Native Americans. Shit quickly gets weird. Everyone around her seems to be telling conflicting stories, there's strange notes in an old copy of Kitten that Megan found in her mother's office, there's a hot guy who might be dangerous, and Megan herself is suffering from a strange and mysterious illness that seems like it might be more than the mere neuropathy she thinks it is. Interspersed with Megan's narrative are excerpts from the Kitten book and it's honestly so deliciously satisfying how well these excerpts mirror the story.

As someone who loves 70s Gothic horror, this was pure catnip to me. It kind of reminded me of a cross between THE THIRTEENTH TALE and WATCH THE GIRLS, with a liberal dash of MY SWEET AUDRINA. The secrets upon layers of secrets, mixed media story-telling, Gothic setting, and literary references were so, so good. Also, as a writer, I loved all the elements about writing and story-telling and the sort of farcical pageantry that some authors buy into when they start believing their own bullshit. Here, of course, there is a much more sinister component going on: the potential for murder.

I don't want to say too much more but holy shit, that ending was CRAZY.