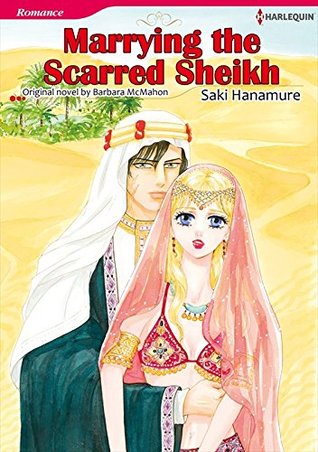 I think I gave this book more than a fair shot even though, as a rule, I really don't like sheikh romances. But I do love Harlequin romance manga, and I'm wickedly behind on my reading challenge, so maybe I was in the mood to be surprised. Was I surprised? No, unless you count being more annoyed than I thought I would be with this book.

So first off, sheikh romances tend to do this thing where the authors will make up a "fake" Middle Eastern country and then, you know, make it a cultural mishmash of several other countries. I had high hopes at first because the hero had an Iranian last name instead of something made up, so I was like, oh cool, is this actually set somewhere real? NOPE. This fake country is named "Quishari" which kind of made me feel like the author came up with the story idea over brunch one day and was looking at her quiche and was like, BINGO. I guess we're just lucky that she didn't call it something like "Mimosastan" or something even more stupid. If you're going to set your book in some far-off location, just do the research into the culture. Seriously, it'll be so much better, and so much more respectful to the people who actually live there. I read this bad romance set in India (by a white lady), but it was in a real place and the author actually did some research into the scenery and setting, and even though it was totally yikes-on-bikes levels of problematic, that did factor into my rating. Trappings of Orientalism aside.

The story itself was super meh. The heroine is a glassblower who lives in the house of this rich lady (wife of a sheikh I guess) who basically gives her board in exchange for free art. This, my friends, is what is known as being paid in exposure, but hey, whatever floats your boat. Anyway, the heroine likes to walk by the ocean late at night by herself to cool off from working with all that fire, but one night she sees something even hotter: a naked man skinnydipping in the sea. So obviously she stays and watches.

IT TURNS OUT THIS MAN IS THE SHEIKH.

I bet you totally weren't expecting that. :yawn:

I got bored with this story because one, I was getting annoyed with the generic Middle East setting; two, nothing interesting was happening; and three, the sheikh is arguably conventionally attractive (I mean, it's a manga so it's hard to tell, but YOU KNOW), except for this scar on his face, and he's just SO SHOCKED that the heroine isn't turned off by this scar because literally every other woman he meets is either like EW GROSS or LOL I'LL PUT UP WITH IT FOR THOSE DOLLAR BILLS. Which I find hard to believe, ma'am. Jason Momoa also has a facial scar, and I don't see ladies being all, EW JASON MOMOA?! BUT HE HAS THAT GROSS SCAR THO.