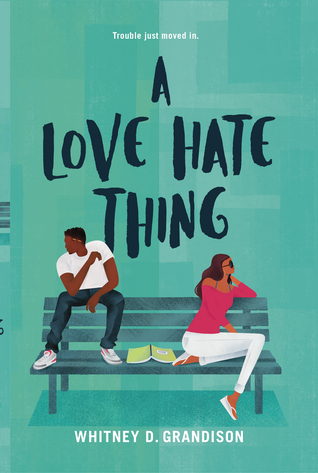 A LOVE HATE THING was an impulse buy for me. I saw that the reviews for it weren't all that great, but it's enemies-to-lovers, and I'm a sucker for that, so I went ahead and bought it anyway. I don't think it's as bad as a lot of people were saying, but the complaints are all fairly on point: it relies on stereotypes, sometimes the dialogue feels canned, and it's a little bit vapid at times. But on the other hand, it's a story of teen drama set on the beach, so I wasn't expecting Tolstoy.

Trice and Nandy were friends when they were young, but then Trice moved to Lindenwood, which is a not-so-great area. Trice ended up involved in a gang and purchasing a gun, which his father then used to shoot his mother, himself, and Trice. Trice was the only one who survived, and ended up becoming the ward of Nandy's family.

Nandy is a spoiled rich society princess who is dating a white guy and spends all her time by the beach or planning social events with her multiracial group of rich friends. She's less than thrilled when Trice moves in and makes all these pretty toxic assumptions about him. Once she starts to get to know him, though, she realizes that she had him all wrong, and that where you come from doesn't really define you as a person. (Surprise!)

So here's what I liked about the book. I liked that both the hero and the heroine were Black. I thought it was cool how Nandy had an adopted younger brother who was Thai. I loved the beach drama and how it made me vaguely nostalgic for things like Laguna Beach and The OC. I liked how both characters had pretty dramatic character arcs. I liked the big cast of side characters. I liked that there were break-ups and make-ups and that these were handled mostly with maturity. I liked how the heroine was difficult and not all that likable, which made her feel very complex.

Here's what I didn't like about the book. I didn't like how Trice was made out to be this really talented writer when his work was just straight-up self-insertion. This is a key element of his character development, so it kind of stuck out. I didn't really like the romance between Trice and Nandy. They felt like they were more convincing as friends than boyfriend and girlfriend (although if you're into stepbrother romances, this ends up kind of being like that, since he's the ward of her family). I didn't like how the drama sometimes became circuitous and repetitive. I thought the book took a long time to get rolling and sometimes it felt more like an after school special than, you know, beach drama. Also, MYSTICAL COMA DREAMS. I hate this trope so much. I'm sorry, but I do.

Overall, though, I did think this was fun, and it has an AMAZING soundtrack in the back. If you like your drama to be served up with a side of real world issues, you'll probably like this a lot. Just keep in mind that, true to classic teen movie format, it's pretty clique-driven and every character in here kind of boils down to one defining stereotype (although the author does subvert a couple of them in interesting ways). This won't be topping my favorites lists, but I'd read more from this author for sure.