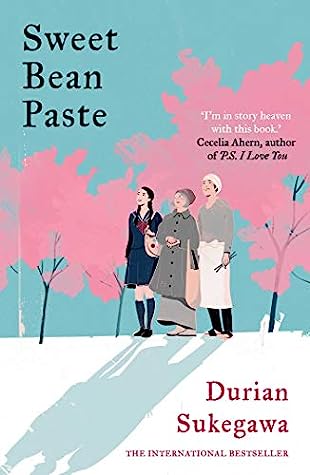 I went into this with no expectations. I'd seen people raving about this Japanese novella but didn't really know what it was about. The hero of this book is a man named Sentaro, who is an ex-con and an aspiring writer, who works as a cook making crepes filled with sweet bean paste. He leads a jaded, monotonous existence, in debt to his employers, so when an old woman with deformed hands comes to him one day begging for work, he isn't quite sure what to do. At first, he rebuffs her, but her persistence ends up paying off after he samples some of her sweet bean paste and finds it to be incredibly delicious.

The woman's name is Tokue and she is a mysterious, enigmatic figure. The story leans a little heavily on the Magical Old Person trope but she has nuances that keep her from being a stereotype. Tokue is actually suffering from Hansen's disease, which is a type of leprosy, and even though she has been asymptomatic and "cured" for years, her hands still bear traces of the disease, which has caused people in town to talk and customers to slowly drop away from the dorayaki shop.

This is a really interesting book that explores friendships between people of different social classes and age groups, and also what happens to people suffering from diseases that society doesn't understand. The history about how people with leprosy were treated in Japan was really awful (there was also a leper colony on one of the Hawaiian islands, if I recall correctly, that were similarly ostracized and swept under the rug). My heart ached for Tokue and I really liked how her gentle friendship with Sentaro encouraged him to be a better person and to seek agency in his own life.

SWEET BEAN PASTE is a bittersweet story that has lovely descriptions of food and Japan and even though it is short, it manages to convey a ton of character development in a very short time and it is very life-affirming. I recommend this to anyone who enjoys Japanese literature.