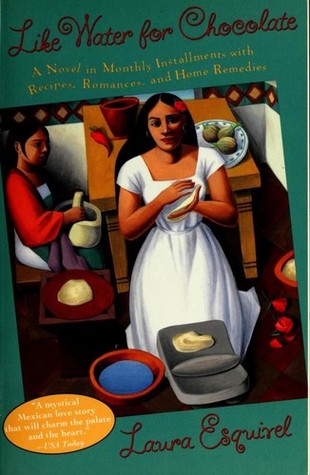 I don't read a ton of literature now because I read a lot of the ones most worth reading when I was younger (at least, the ones I thought worth reading), but one of my recent projects is revisiting some of the books I read as a teen and seeing if I liked them just as much upon taking a second look. I read LIKE WATER FOR CHOCOLATE when I was in high school and I remember being totally shocked at all the scandalous sex scenes and family drama. In many ways, this is kind of like a magic-realism take on the V.C. Andrews fucked-up family Gothic, with all of its secret lusts, hidden violence, and tempestuous relationships, all lorded over by an evil matriarch who has it in for the heroine and wants to make her miserable.

Narrated by the grand-niece of the heroine, this is a story about a star-crossed romance. Tita, the heroine, is the youngest daughter of Mama Elena, which means that she must take care of her mother until she dies. When Tita falls passionately in love with another man, Pedro, her mother rebuffs his offer and hitches him to her other daughter instead, Rosaura. Pedro agrees only because marrying Rosaura means being close to Tita and he hopes to have an affair with her.

Lots of other things happen too, and some of them are totally crazy. Like, imagine causing fireworks displays and visions of the Northern lights every time you bang (you might be in a Sarah J. Maas novel!) Feelings also get transmitted to food, so depending on the mood of the chef that day, you might find yourself moved to bitter tears (to the point of death) or so desperately horny that you set your bath on fire. This fantastical element keeps the story moving and gives it an interesting, fairytale-like quality that I found fascinating, even though some of the characters made me want to knock their heads together.

If you're new to the magic-realism genre, this is a fun book to start out with. It's short, which makes it easy to read, and has all these fabulous descriptions of rustic Mexican cuisine. The romance is also fun, even if it doesn't really have the sort of HEA romance readers might expect, and has an over-the-top bodice-ripper vibe that I think I appreciate more now as an adult who reads bodice-rippers. Some people might say it's too racy for teens but I disagree-- for some teen girls, this will probably be the hook that gets them into classic literature and shows them that it's not all stuffed shirts and dusty parlors.