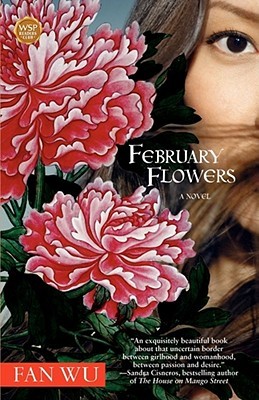 I read FEBRUARY FLOWERS a looong time ago when I was going through an Asian literary fiction obsession (and if that sounds like fun to you, you're in luck, because I managed to dig out several other titles from that era). In case you missed it, I'm currently doing a project where I reread the books I enjoyed as a teen. The reason for this project was one too many book slumps. I thought it would be fun to revisit some of the books that really cemented my love of reading and inspired me to blog in the first place. This book is one of those books.

FEBRUARY FLOWERS is a very slow-paced book. I vaguely remember giving it a three star rating when I first read it and I think it's because, at the time, I really didn't know much about China and couldn't appreciate how well this novel shows a country in a state of flux. It's set in 1991, and features two girls: Ming, a seventeen-year-old university student who embodies all that is considered traditional in Chinese culture, and Yan, who is twenty-four, and a total rebel. When they meet, Ming is fascinated and a little disgusted by Yan, but that doesn't stop her from getting sucked into the other girl's compelling orbit. Eventually, the two of them become friends, but the tension between them seems to suggest that there's so much more.

I'm shelving this as an LGBT+ book because at least one of the girls seems to be coded as having an attraction to girls, even if she can't express it. I think I missed all the sapphic undertones when I read this book for the first time because I was pretty naive. The intense, almost sexual friendship between Ming and Yan really adds tension to the narrative, and reminded me of some of Megan Abbott's books, who also writes about the fierce, close, and sometimes fraught relationships between young women. I actually think that if you enjoy Megan Abbott's work, you'll probably really enjoy FEBRUARY FLOWERS for the same reasons that Abbott's work is so beloved.

It's not a particularly happy book but it isn't as depressing as I feared it would be either (*cough* bury your gays *cough*). I think it comes off as being wistful and nostalgic, and a criticism of some of China's less attractive elements, while also portraying university life, university friendship, and the rapid development and growth of China's urban locales. I'm actually kind of sad that more people haven't heard of/aren't reading this book because I think it's really, really good. If it was published today, I'm sure it would make more waves now than it did in its release in 2007 because it really ended up being a book that was way ahead of its time. Definitely check this one out.