A Room with a Darker View : Chronicles of My Mother and Schizophrenia by Claire Phillips 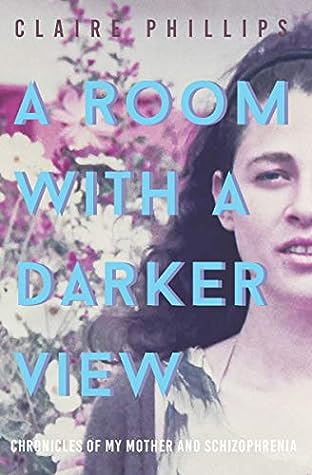 This was such a good memoir. When I was a psychology student, I read a lot of mental health memoirs, sometimes because they were required and sometimes just because it was something I was interested in. As the author herself points out, such memoirs used to be notable and hard to find-- as it became more publicly acceptable to talk about and discuss mental health, however, there was a glut of memoirs about people who were suffering from various mental health problems as well as those written by their caregivers, creating public awareness and also removing the barriers erected by societal stigmas.

A ROOM WITH A DARKER VIEW is a beautiful memoir about Ms. Phillips's coming of age with two career-minded parents while also growing up under the shadow of a mother in the early phases of prodromal schizophrenia that gradually blossomed into a case that was quite severe. She talks about the hurt and confusion because sometimes her mother would say and do incredibly awful things. She talks about what it was like being her mother's caregiver, the side-effects of taking Haldol, and what happened when a pharmacist screwed up and her mother was given incorrect dosage and incorrect instructions.

I just can't say enough good things about this book. It was brutal and honest and fascinating. She doesn't dramaticize anything, and she doesn't try to portray herself or her mother as a martyr. The portions about mental health and feminism were fantastic, but I also liked the more "normal" parts too, like the culture shock of being a British student in an American school (and vice-versa), or her trip to Zimbabwe, where she talks about apartheid or the questionable legacy of her cultural anthropologist grandfather and how his own biases colored his research. It was just a fantastic book all around, textured and nuanced and deep, and I would recommend it to anyone who enjoys memoirs or has an interest in mental health.