Katie.com: My Story by Katherine Tarbox 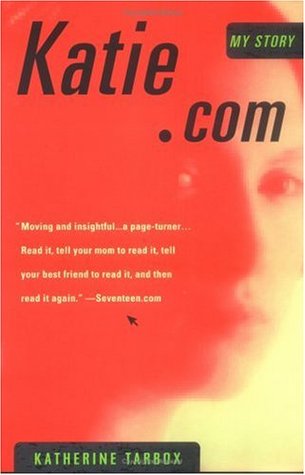 I'm doing this project where I'm rereading the books I read as a teenager and seeing how they hold up. KATIE.COM (later retitled A GIRL'S LIFE ONLINE) is one of those scare-memoirs that talks about a pretty traumatic incident in an attempt to use it as a teaching point. It's set in the early days of the internet (late-90s) when chat rooms were all the rage. As a thirteen-year-old, Katherine Tarbox met a guy claiming first to be 23 and then later 31 (he was actually in his 40s) who groomed her into a relationship that culminated in meeting with him at a hotel and molesting her (with an attempt to probably do more). I remember reading this and being totally suckered in by the premise because it sounded a lot like those articles I'd see in my issues of Elle and Teen Vogue, where girls would write in talking about how they got their stomachs pumped from ODing on ecstasy or-- one in particular I remember because it was so horrifying-- being molested by an uncle while interning at a morgue.

I am honestly shocked that this book has such low ratings. Katherine wrote this memoir when she was still a teenager and she comes across as sounding very honest and straightforward about her experience that it actually breaks your heart a little because she seems so earnest. She lived in New Canaan, so there are huge swaths of exposition about her privilege, but I think that just goes to show that while privilege might prevent abuse, it doesn't remove the risk entirely. With her busy parents, Katherine was pretty vulnerable and emotionally needy, which ended up making her the perfect prey to an internet predator who treats her as the adult she wants to be while exploiting her loneliness.

What made this a really hard read-- and totally went over my head the first time I read this-- was all the gaslighting. Her parents tell her that she's "ruining a man's life" (debatable: didn't he ruin his own life by going online trying to hook up with adolescent girls?). Her swim coach makes her stand up in front of everyone, tells them all what happens, BLAMES her, and then makes her apologize. To everyone. For being molested and distracting them from the swim meet. Because apparently it was her fault for going up to his hotel room. Hotel staff got involved pretty quickly because Katherine had the foresight to tell her friend where she was going and her friend told an adult, but even though the adults' intervention prevented worse things from happening, the way they blamed an innocent and naive kid for her situation was pretty sickening.

After it was all over, because the coach made what happened to Katherine public knowledge to all her swim mates, Katherine was bullied at school and called a slut. Her mother got phone calls about her from parents who (from the subtext) seemed to be demanding that she get an STD test lest she contaminate the other girls with her uncleanliness. It was truly nauseating and left me with a sinking feeling in my stomach. I think this could be really hard for victims of sexual abuse to read. It seems like an incredibly triggering memoir and I can only imagine how confused the poor author felt.

Overall, I thought this was a really good memoir about internet predation and sexual abuse. It doesn't really age all that well because the internet has changed so much-- but people still groom minors online and young people are still (perhaps even more so) vulnerable when they use the internet, and I liked that the author ended the memoir with resources on how to protect your kid online while web browsing (although it could probably use an update).