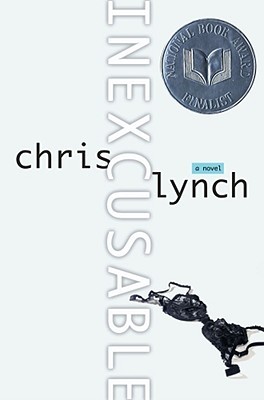 I bought this a while ago and never read it and one of my projects is to go through all my YA and get rid of the ones that aren't worth keeping. It's interesting to me that so many of the reviews for this book claim that this is taking an apologist stance on rape because I really didn't get that read anymore than Nabokov's LOLITA is advocating for pedophilia. Both books have unreliable narrators who truly believe that they have done no wrong, even though they are hurting people and operating within a moral void. Their goal, as the main character, is to convince you, the reader, that they are, in fact, the good guy.

INEXCUSABLE is slightly less disturbing than LOLITA, but its premise is no less grave. Keir is a football player who has just been accused of rape by a girl friend of his. He is convinced that it wasn't rape and the whole book is a laundry list of all the reasons he can't be a rapist-- because he is, in fact, a "good guy." But if you parse between the lines, the evidence kind of mounts up against him. He's selfish and believes that everything revolves around him. He hurt someone badly in football and makes light of it as being part of the game. He doesn't think of his sisters as people and refuses to entertain the idea that their wishes might differ from his. He has a father who is reliving his own glory days through him and no mother. In fact, his mother is dead, and Keir resents her passing as an inconvenience to himself.

So it really isn't surprising, then, that when he covets the girlfriend of one of his friends, he constructs this entire narrative in which she is just another thing-- yes, thing-- that is his due as one of the ball-playing golden boys in town. A narrative in which her boyfriend doesn't deserve her, because he is obviously the better candidate for boyfriend; a narrative in which there is no possible reason she would ever refuse him because nobody ever does; a narrative in which he is, in fact, the good guy. The end of the book takes a slightly chilling turn as Keir maybe, finally, gets a tiny glimpse of what a monster he is capable of being for maybe the first time in his life and the book ends on that shivering note.

INEXCUSABLE is heavy-handed and I thought it lacked subtlety personally, but so many people seem to be taking this book at face-value that maybe it had too much subtlety? It's funny because I just read SPEAK, and was thinking that Andy Evans, the rapist in SPEAK, probably had a similar running narrative in his own head-- and then I saw that one of my friends had come to the same conclusion in her review. Is the rapist's narrative really necessary or even desirable? No, not really. But I do think the author did a really good job with this experimental work-- what is writing if not an ongoing social experiment?-- and that it reads as a condemnation and not an apology, but rather a close examination of the kind of toxic culture of masculinity that breeds excuses instead of accountability.