Gone: A search for what remains of the world's extinct creatures by Michael Blencowe 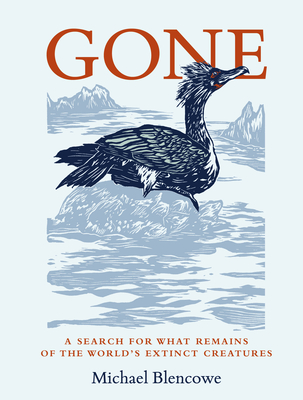 I enjoy reading trash as much as the next person but I do have a degree in the (social) sciences and I actually love biology, so whenever I can get my hands on books about botany, biology, psychology, or the natural world, I start to get grabby. Looking at the other reviews for GONE, I wasn't really prepared for what it was going to be about. I thought it was going to be about animals that were thought to have been extinct but weren't (such as the frilled shark or the coelacanth), or about weird animals that have been extinct for years that are really cool looking (like eohippus or the smilodon). Instead, the focus of this book was mostly about recent extinctions and features some pretty graphic descriptions of animal cruelty. What happened to the great auk and the huia were particularly upsetting.

GONE focuses on several creatures recently lost to history-- great auk, spectacled cormorant, Steller's sea cow, upland moa, huia, South Island kokako, Xerces blue, Pinta Island tortoise, dodo, Schomburgk's deer, and Ivell's sea anemone. Each chapter features beautiful full color illustrations of what the animals would have or were thought to have looked like in life, a description of their behavior and habitat, and, when known, the means of their destruction (usually human beings). Every animal gets its own chapter.

The tone of this book is, as others have pointed out, strange. Blencowe definitely adopts an elegiac air for these stories that shrouds them in gravitas, but there are odd notes of humor (that aren't disrespectful, just sort of read as the author trying to keep things from getting too dark). At times it reads like a travelogue because he is physically going to all of these animals' stomping grounds or to the museums that house their remains, and there are even moments where the narrative can feel almost whimsical. There's an incredibly darkly funny passage in here about a scientist who was so consumed with hatred over one of his rivals that he kept a piece of his spine on display after his death. I mean, that's just purely ridiculous. But then there are the really sad passages about animal deaths that are hard to read, and I think would be very upsetting for the animal lovers who might be tempted to pick this up.

I think if you really enjoy natural history and are okay with the darker side that sometimes accompanies scientific curiosity left unchecked (if presented as a cautionary tale), you may find this book interesting. I learned a lot and found parts of it fascinating and I loved the illustrations, but I would not read it again.