A Captain for Caroline Gray by Julie Wright 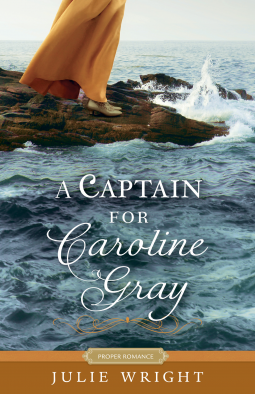 A CAPTAIN FOR CAROLINE GRAY is a sweet and simple romance that's told in the style of those old Candelight Regency romances-- it's a very clean, very spare story that focuses mostly around the romance with some plot dressing, and an attempt to deepen the characterization of both primary and secondary characters. I was actually impressed because it's been a while since I read a straightforward romance and it was much more substantial than I was expecting.

Caroline Gray is a bluestocking. She and her mother are about to be ousted from the family home because her father has passed and the property is about to transfer to the next male relative, a cousin, who is getting married. Caroline is such a nerd (and so outspoken) that she's put off most of her would-be suitors and her mother is going to be companion to yet another distant relative with no room for Caroline, so she's contracted for Caroline to go abroad to India to make a marriage match abroad.

Most of the story takes place on the ship where Caroline is making her journey, so we meet several other women and men who are venturing to India for various reasons, as well as the Captain, Thomas, who is Caroline's love interest. I didn't realize when I got this book that this was a grumpy/sunshine romance, and since I love those, my interest was immediately piqued. Thomas is a bit surly but never outright mean and I thought he had really great chemistry with Caroline, especially since he found her strong personality so compelling.

Obviously there's a big misunderstanding in the third act but it wasn't so bad and it ended up being that neither character was totally in the right, which kind of ended up making it feel like they were both on even ground. The ending was totally satisfactory and there was even a bit of action I wasn't prepared for, so overall this ended up being a pretty sweet romance. It's a little forgettable, which is probably its only flaw, but after a slew of heavier reads, A CAPTAIN FOR CAROLINE GRAY ended up being just the thing I needed to cleanse my literary palate. If you like clean romances with strong protagonists and grumpy/sunshine pairings, this is your book.