After by Francine Prose 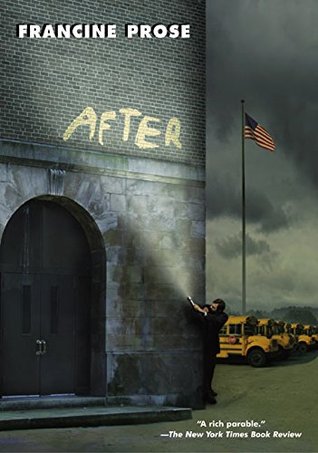 There's this movie called Disturbing Behavior (1998) that I really liked when I was younger. It's like Stepford Wives meets Invasion of the Body Snatchers, and it has a baby James Marsden and Katie Holmes in it. It's dated AF and riddled with plot holes, but I really liked the story and it had some genuinely creepy moments. Reading AFTER reminded me a lot of a less-gritty version of Disturbing Behavior. Set in the aftermath of a mass shooting, it chronicles a high school's gradual stripping away of its students' liberties in the name of safety. But who will protect them from the protectors?

I remember thinking this book was so good in high school. I stayed up all night reading it, my tiny aspiring writer brain filled with raw envy. It's narrated in first person from a male jock named Tom and I thought the author did a pretty good job making him sound like a real teenage boy; he's selfish but not a bad person, and hyper-focused on what other people around him think of him and his constructed persona, which is why when things start going south, he immediately begins self-doubting his own reality. He doesn't want to look like a coward or, worse, paranoid.

I saw a couple other reviewers comparing this to ANIMAL FARM and I could sort of see that. They have similar themes. ANIMAL FARM worked where this one didn't, though, because it was fantasy and didn't attempt to root itself in reality. There is something almost dystopian about this world, with almost supernatural elements, but they aren't well-explained enough to really work, which makes it feel like several pivotal plot points are either totally lacking in explanation or suffering from deus-ex-machinitis. I feel like the author had this really cool idea but she wasn't really sure how to hash it out, and instead of going full dystopian, full realism, or full Twilight Zone, she compromised with all three.

It kind of reads like a longer, edgier version of one of those old Point Horror books, so if you are in the mood for some creepy-lite that also talks about sex and drugs, you'll probably like this book. I didn't really question it all that much when I read it at age seventeen. I was like, "Yeah! The man sucks! Down with the man!" Now, adult me is like, "Yeah, the man sucks-- but what the fuck was up with that ending and why does the man have god-like powers?" Like... I'm down to hate the man, but I want answers.

This wasn't a bust, but as with my reread of ALL-AMERICAN GIRL, I find that as an adult reading YA, I'm much less satisfied with unsatisfactory explanations and am far less willing to suspend my disbelief.