The Summer of Mrs. MacGregor by Betty Ren Wright 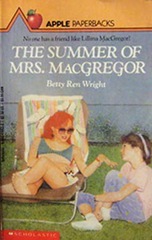 So, I recently read this book called PAPERBACK CRUSH, which was basically a nostalgic retrospective on the popular young adult books of the 80s and 90s, aka my childhood. While looking up all of these titles on Goodreads, as one does, I realized that a lot of these books were actually available to read for free with Kindle Unlimited, which prompted my "Nenia's KU Nostalg-o-Rama Challenge." Code name: read all the books.

Summed up in a sentence, THE SUMMER OF MRS. MACGREGOR could be troubled preteen with sick sister meets teenage Blance Dubois. Caroline is tired of being dull and ordinary. Everyone likes her older sister better, who is chronically ill and suffers from the same illness that killed their father. She's also the good-looking one in the family and nobly suffers in silence (ick), so of course everyone dotes on her and praises her for being a good sport (no, seriously-- ick) and Caroline is left shunted off to the side, feeling both neglected and guilty.

So it really isn't a surprise that she immediately gets sucked into the orbit of the troubled teen next door, Liliana MacGregor, who claims to be:

As a thirty-something reading this, obviously this set off All the Alarm Bells, but Caroline thinks this is neat-o and that Liliana is the most glamorous person on earth. Never mind the fact that she wanders around the yard in a short bathrobe, tries to pet snarling dogs, and spends most of her free time trying to trick saleswomen into letting her try on expensive clothes and/or selling her alcohol.

Spoiler: Liliana is really not so neat-o.

PAPERBACK CRUSH was pretty up-front about how problematic this book is, but it really is quite problematic. Especially since the resolution with Liliana isn't very satisfactory. I get that this was written for kids, and seeing someone punished for being pathological-- sorry, I meant a "free spirit"-- wouldn't be very fun for the kids siding with Caroline and Liliana, but as an adult with a degree in psychology, it really felt like Liliana was suffering from something like bipolar or borderline personality disorder and the pathological lying and stealing was a side-effect of something serious.

Points for an interesting story but this book falls short in a big way of its portrayal of someone with mental illness. Part of that is definitely because of when it was published, but like many modern stories, it falls into the trap of sensationalizing psychological problems to titillate the audience without really knowing what a successful resolution for something this serious even looks like.