Purchased for Revenge by Masako Ogimaru 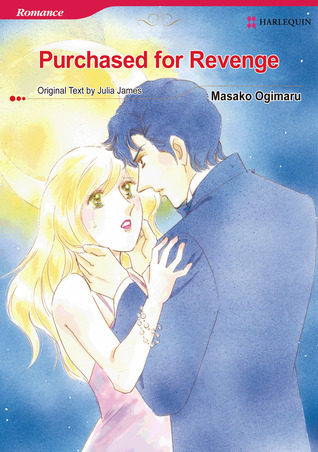 So if you've been following me for a while, you'll know that I am obsessed with Harleqin manga. They originally were from Japan-- according to an article I read a while ago, it was how a lot of Western romances from Harlequin and Mills and Boon were packaged for a Japanese audience-- but then, as these things sometimes do, HQ manga came back to the West full circle, to be consumed anew.

Most of them are actually quite fun. Josei manga is manga for adult women, which is basically what these are. People who enjoy manga geared towards an older audience will love this for the art and mature storylines, and romance readers, I'm sure, will enjoy seeing their favorite stories by their favorite authors retold in a new medium that brings the characters to life. I've only read a couple of these, but I found the ones that were adaptions of books that I'd already read to be the most fun of all, because it was like reading the story with fresh eyes.

PURCHASED FOR REVENGE, however, is not my favorite. A huge part of that is the art, which I thought was really ugly. It has a juvenile, retro look, like that in what you'd see in magical girl shoujo manga from the early 90s (thinking specifically of Saint Tail). I was never a fan of that look and I didn't like it here-- ESPECIALLY since this is one of the darker manga I've read in terms of tone, and the juvenile art makes the story seem even more disturbing in comparison, like it doesn't do it justice.

Basically, the heroine, Eve, is the daughter of an incredibly corrupt business man who abuses his wife, abuses women generally, treats women as objects, and lives only to close more business deals and pursue a life of decadent power grabs. One day, at a networking/look-how-much-money-I-have party, bored Eve sees a man who intrigues her. This man is named Alexei and he is one of her father's enemies who is hoping to buy out his company. Alexei seems as surprised as she is to realize that she's the daughter of his enemy, although his plans are much less benign.

Eve's dad actually offers to sell her (yes, like that) to Alexei for a night without her knowledge as a bribe for a deal. Alexei turns it down, ruins the family and drives the dad into hiding, forcing Eve to come to Alexei trying to buy back their property (which she helps run as a clinic). Alexei says ok but she has to spend a night with him and even though it's not graphic, it's heavily implied that it's degrading non-con/dub-con. And it turns out, of course, that everything Alexei thought about Eve was wrong-- not that he should have treated her that way anyway, but even his "reasons" were groundless.

But it's okay because Alexei has a sad boy past and Eve's father was partially the cause of it, so she ends up feeling sorry for him, even though he raped her and tried to kick a bunch of sick kids out of a clinic (assuming it was for her alcoholic mother only, as if that makes it any more okay). This story was just all kinds of gross and I didn't like the tonal dissonance between art and story. I might read the original book at some point but I don't recommend the manga at all.