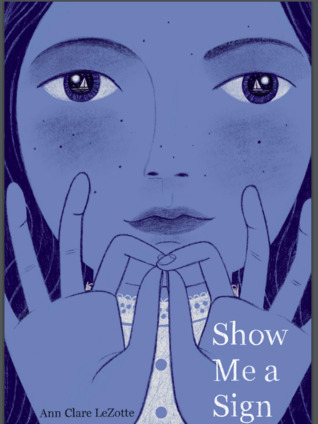 Before Martha's Vineyard became a getaway for the rich, it belonged to the Wampanoag, who then sold the land (arguably under incredibly unfair terms) to English settlers, who came from a town in England called Weald where Deafness was a recessive trait that ended up showing up more and more in the small and isolated population, which ended up resulting in the community developing a village sign language called Martha's Vineyard Sign Language. I had never learned about any of this before and was really excited to learn about the history of Martha's Vineyard.

Our heroine is a young girl named Mary whose brother has just died in a terrible accident. She feels responsible, and the death has caused a rift in her family, as her brother could hear (like her mother), whereas her father is Deaf like her. Watching her mother grieve and her lack of care in expressing her obvious favoritism among her children is heartbreaking, and Mary ends up spending more and more time with her friend, getting into mischief, when a scientist named Andrew comes to the island to make discoveries.

Pretty soon, however, it's clear that Andrew's intentions are less than pure and he has absolutely zero respect for those who are Deaf in the community. Prior to this point, I was thinking that this book reminded me a lot of the American Girl books I used to read as a child, but this book, with the way it confronts ableism, cruelty in the name of scientific advancement, and racism, is actually much darker than I anticipated. I don't think it's inappropriate for middle grade, but it will definitely give kids a lot to think about while reading. It gave me a lot to think about while reading.

SHOW ME A SIGN is #OwnVoices in that the author is also Deaf and worked to incorporate sign language into the story in a way that feels fluid and conveys to readers who might not speak sign language what that sort of communication feels like to "speak." I loved the physicality of it, and how LeZotte incorporated the motions of hands into the dialogue, and it was really, really well done. She wrote a great author's note in the back about the liberties she took to convey MVSL, which is now a dead language, as well as the history of Martha's Vineyard itself.

I liked this book. In terms of pacing, it's decent. Definitely feels slow until the dark twist with Andrew's character, and then everything speeds up. I do think that this will appeal to those who like American Girl books, as it ticks all those boxes: it is part of the history of the United States, but it also explores the darker side of that history, and a young girl who has that history as part of her heritage gets to pilot through that story with her own agency as vehicle. SHOW ME A SIGN will probably appeal more to young readers and educators than older teens and adults, but I do think it is worth reading and talking about, if only so it finds its way into the hands of more kids (particularly kids who are Deaf/HoH).