How Dare the Sun Rise: Memoirs of a War Child by Sandra Uwiringiyimana 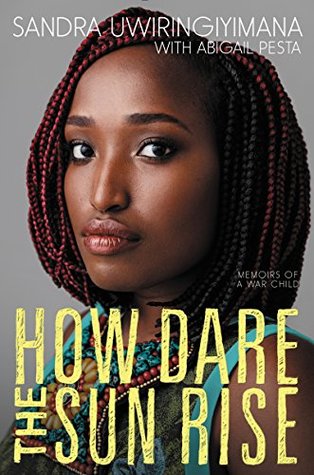 This is one of the best memoirs I've ever read. Sandra is Banyamulenge, which is an ethnic minority in the Democratic Republic of the Congo, discriminated against by the Congolese. She and her family were forced to flee to a refugee camp during the Second Congo war, where they lived until 2004, when they were victims to the massacre by the National Liberation Front of Burundi. She watched them burn the camps, killing people she had known and grew up with before her very eyes. Her mother was shot in front of her, her sister killed, and then one of them put a gun to her head and she prepared to say goodbye to her life. For whatever reason, the man did not pull the trigger, and she survived to tell this incredible story.

This memoir is mostly linear, although she opens with the devastating attack on her refugee camp, before going back in time to give us an idea of what her life was like growing up in Africa. A lot of people in the United States, myself included, don't really know much about Africa, or its history, and a good number of them probably couldn't even think of a country on that content (not even the obvious Egypt). She does this to serve two purposes, to give you an idea of her background and put a human face to the acts of genocide her people have suffered, and to debunk a lot of myths the reader probably has about where she comes from (yes, her people had shoes and cars, don't be ridiculous).

Eventually, she and her family were able to come to the United States as refugees, but this was no perfect fairytale ending-- and here is where my appreciation for her memoir really grew, and why I think her memoir should be required reading for everyone. As a Black woman from Africa, she came to the United States as an outsider to the racial tensions in the United States, and writes extensively on how crime committed by African Americans is disproportionately represented and reported on in the media, and how many white people treat Black Americans as if they are always on the verge of committing a crime. She writes about how she often didn't feel Black enough, not knowing much about American culture, let alone Black American culture, and how the two things might differ and overlap, and how living in the United States always seemed to force her to define herself by the color of her skin. The more dialogues she engaged in with her African American friends, the more she learned about institutional racism with regard to police discrimination, and about the Black Lives Matter movement.

As she got older and went to high school and then college, she began to struggle with what I believe is PTSD, as memories of her sister's death and the massacre haunted her. She poured herself into activism and got to go to a panel with Madeline Albright and Angelina Jolie, and, a few years after that, was invited to the White House Correspondents' Dinner where she got to meet the Obamas. She writes about the struggles of translating for her parents, and dealing with a lot of things that most children don't (like dealing with bills and telephone companies). She writes about the constant push and pull of her parents trying to uphold the norms of traditional African culture while also making allowances for the norms of the "typical" American teenager. She writes about being the victim of discrimination herself, and the frustration and rewards of making people care about a country they don't know anything about, as well as the exhaustion of being the unofficial ambassador of all Black people for her white friends and acquaintances. It's moving, heart-rending, eye-opening, and evocative.

The book ends with a photo gallery of other survivors of the massacre in the DRoC. Many of them now live in the United States and all of them want the people who claimed responsibility for the genocide to their people to be punished (as they should). It's the perfect end to the perfect book, and I loved that Uwiringiyimana included several personal photos of herself at several key moments in her life in the gallery, including the only photo she has of her younger sister, Deborah, who was murdered.

Uwiringiyimana is such an inspirational figure. Her passionate activism work, her openness about her struggles with mental health, and her willingness to share her own painful, personal stories with strangers to advance the cause of the people she's fighting for will resonate with anyone who shares her values and her desires to see the world be made into a more fair and just place. I loved the stories of her family, and how her father's feminism inspired her so personally, and how she debunked so many of the toxic stereotypes that Western people have about Africa, providing a realistic perspective about her home in the Congo, while also providing an equally realistic perspective about the U.S.'s flaws.

I think literally everyone should read this book.