How Zoologists Organize Things: The Art of Classification by David Bainbridge 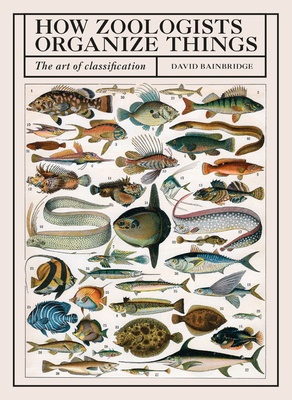 This is such a beautiful book. It's hard bound, with actual thread in the spine holding the pages together. I haven't seen a book like this in years, it's so wonderfully made. I've always loved biology-- it was the only science I ever really felt passionate about-- so obviously I couldn't pass up the chance to get this book that's part art book, part history book, and part science book. HOW ZOOLOGISTS ORGANIZE THINGS is a history of taxonomy, yes, but it also has many beautiful full-color illustrations (at least one per page, I would say), and lots of interesting history about how the way we viewed the natural world changed over time.

The book begins with bestiaries and theology, and the mysticism with which people in the dark ages viewed animals and wildlife. The animals are quite funnily drawn, with faces that look more like human faces placed on an animal body, and it's quite strange. The lore they came up with about these animals is also ridiculous. Apparently at least one author believed that hedgehogs were evil, mischievous critters who rolled in fruit to have it stick to their spines so they could steal it away. How funny!

During the Renaissance, the observations become more scientific in nature, and obviously, in the 19th century, it became a full-blown field that had explores tromping off into the far reaches of the world, looking for new specimens. Lest you think that the author ignores the darker side of that research, he does not. The racism and colonial entitlement of these explorers is noted several times on the page; scientific discovery advanced before people's ethics did, with catastrophic results.

The book ends with some of the more modern advancements we have made with our current science, bringing the book full circle. We start out with codices of bible stories, and end on microscopic images generated with computers and powerful microscopes. There's still lots we don't know about the animal kingdom, though, and I think the one constant in this book is that sense of wonder and innate curiosity that led to these sorts of studies (even if that curiosity could, and did, end up becoming quite cruel).

This is not an easy read but it is very image-heavy and the images are absolutely gorgeous and have very helpful captions. Anyone who loves biology and history might consider buying this book for the images alone. I've already had several family members ask to borrow this book when I'm done because they were so impressed by the illustrations. The author, David Bainbridge, is a veterinary anatomist at Cambridge, and his knowledge really shines through in this book.