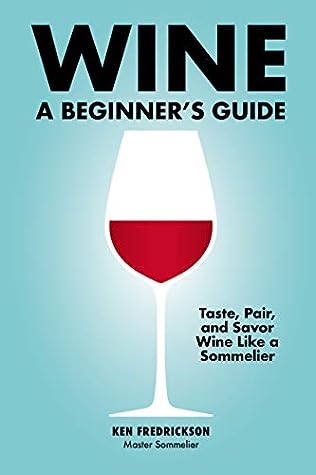 I am a San Franciscan stereotype: I drive a fuel efficient car, chug free trade coffee by the gallon, work in tech, eat avocados by the bucketful (but especially on toast and especially with sea salt), am what one of my friends charmingly called a "freegan" (semi-vegan/vegetarian unless delicious animal products appear in front of me-- for free-- and then OM NOM NOM, because hello! food) and I am obsessed with wine. God, I love wine.

There was no way I wasn't going to say yes to an advanced reader copy of this book. Because wine. People say nobody loves wine like the French but I can guarantee you that none of the people saying that have talked to a tipsy Californian two-fisting a flight of reds. I see your Paris Judgement and raise you a Californian Side Eye.

WINE: A BEGINNER'S GUIDE tells you everything you need to know about wine. How it's made, how to taste it, what the different kinds are, what to pair it with, and what makes a good wine versus a bad wine. Even though this book is short, it's very comprehensive, kind of like an abridged version of this other (also amazing) book about wine I read recently, by a German guy, called WINE FROM GRAPE TO GLASS. I actually think that this would make the perfect gift for someone turning twenty-one or trying to discover wine, especially if you gave it to them paired with a really awesome and unusual wine, like a rioja or a vinho verde.

On that note, bless this book for not being snobby about Spanish and Portuguese wines. The author really tried to talk about all of Europe's wine regions and even, bizarrely, South Africa's. Not China's, even though they're an up-and-comer, but Argentina and Chile both got a shout-out. Portugal and Spain both have really good wine and when I went to Portugal last summer, I kind of felt like a kid in the proverbial candy shop. You could get really, really good wine for really, really cheap. Bravo.

There were only two things in here that I took a teensy bit of an issue with. First, the author talks about the wine flavor wheel, which is a really cool diagram that gives you all of the different terminology people use to describe wine flavors, ranging from "melon" to "band-aid." But he doesn't show the picture. I don't know if it's a copyrighted image, or what, but that made me sad, because that was what first introduced me to wine terminology as a green and naive twenty-one-year-old, before I entered my own period of veraison and my knowledge ripened just like a fine wine grape.

Speaking of wine grapes, the second thing I took issue with: this dude did what every other non-Californian wine "aficionado" does when talking about Californian wines: he focused on Sonoma and Napa only, which is a huge rookie mistake. Because yes, while they are the most famous, they're also now the most over-priced and kind of old news. Nobody (who is non-Californian) ever talks about Lodi or Livermore, which are huge here, and famous for some incredibly delicious reds.

Also, shockingly, no mention of mead. I guess the focus of this book is on grape wine and not honey wine, but WINE FROM GRAPE TO GLASS mentioned it (as well as absinthe), and there's a handful of mead brewers in the San Francisco area (I've been to a couple), so it was a shocking omission. Especially since people have kind of gotten into mead due to the popularity of Game of Thrones.

If you get this book, understand that it's trying to cover a lot in a relatively small amount of space, so of course only the key points are going to be mentioned and much of the nitty-gritty will slip through the cracks. Still, it's a great place to start, and it's got a great, easy-to-read format with some pleasant infographics, and I think if this is your entree to the wine world, you could do much, much worse!