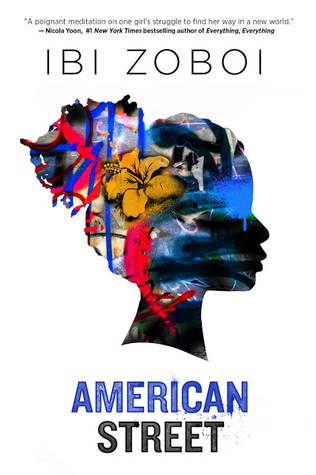 I'm trying to read as many books this month as I can by black or bi-racial identifying authors and AMERICAN STREET is one I was really excited about, because it's been on my Kindle for-EVER. It's the story of a Haitian girl named Fabiola who comes from Haiti to live with her cousins in Detroit. Her mother is detained by immigration officials, leaving her in the care of her aunt and cousins, as she tries to navigate not just American culture, but also negative stereotypes and big city crime.

In some ways AMERICAN STREET really reminded me of THE HATE U GIVE; it's a brilliant microcosm of how institutional racism and negative stereotypes boxes people into corners they can't escape from. The most heartbreaking example of this is Chantal, Fabiola's brilliant elder cousin, who wanted to be a doctor but passed up going to a prestigious school to take care of her sick aunt and her sisters, who are mixed up in the local gangs.
Fabiola finds this out the hard way too when she tries to do an act of good, cooperating with the local police, only to have someone she cares about suffer grievously from her actions.

I loved the heartfelt writing, and the semi magic-realism elements that arose from Fabiola's Voudon and lwa beliefs being incorporated into her narrative. I thought her relationships with her cousins were super complex, giving them an almost Little Women vibe: they didn't get along in a conventional way all the time, but it was obvious how deeply loyal they were to each other. Plus, the banter was great. Interspersed with Fabiola's narrative are brief snippets from those around her, and they really added depth to the story and gave you an idea of where the other characters were coming from.

AMERICAN STREET is a book that will break your heart, but it's worth every shattered piece.