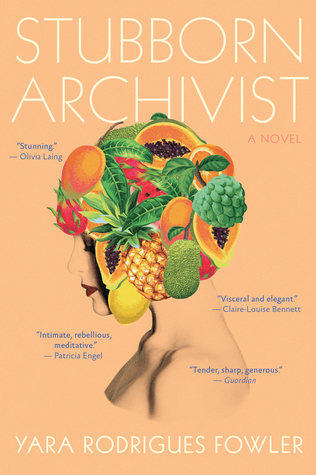 Opinion on STUBBORN ARCHIVIST seemed to be really mixed, with a lot of people's opinions seeming to hinge on whether or not they liked the artsy, experimental, almost free-verse poetry format of this literary novel. I'll admit, it took me a while for it to grow on me-- parts of it are written like the author took a few pages out of Rupi Kaur's or Amanda Lovelace's playbook, but then parts of it are more typical of literary fiction, where it's normal prose, just without any quotation marks.

STUBBORN ARCHIVIST is auto-fiction: fiction that is semi-autobiographical but with liberties taken. The unnamed heroine is half-Brazilian, half-English, and the novel is about her dual heritage, and all of the baggage that comes with that, as well as growing up middle class in London and what it's like returning to Brazil, and also about her families in both countries growing up.

It's a little similar to another work of auto-fiction I reviewed recently, which was called THAT HAIR by Djaimilia Pereira de Almeida. The heroine of that work was from Angola and talked about what it was like growing up in Portugal. She was not biracial like this heroine, but the themes of fetishization, racism, identity, and feeling displaced are shared by both books, and done to great effect. Also, I feel like a lot of the books that I see, as someone who lives in the United States, are books about American identity, so it's nice to see that same perspective from other lenses.

There were parts of this book that I liked more than others. The parts that feel more autobiographical were the parts I liked-- these portions are narrated in "you" form and are all about growing up, intimacy, various microaggressions, her first real career, and a variety of other things that I think will be really relatable to many young women (and men). I was less a fan of the dreamy, omniscient narrator portions that talked about her family, or the perspectives that abruptly switched to her grandmother's or mother's POVs, where the heroine is referred to as "the baby." They just weren't as engaging as the parts that felt more directly intimate and personal.

STUBBORN ARCHIVIST is definitely a unique mode of story-telling and I think people who appreciate unusual narrative styles and diverse perspectives will really enjoy this book. As I said, though, the narrative style takes a while to get used to and some POVs are better than others.

I would read more works by this author.