The Twin by Natasha Preston 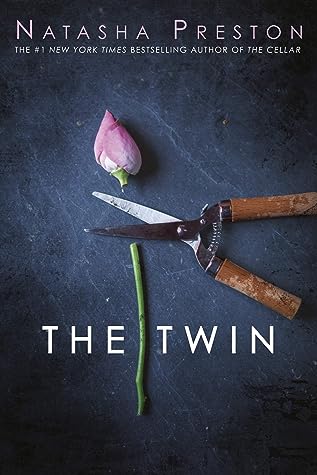 When I was a kid, I was a big fan of the Scholastic Point Horror imprint-- if you're old enough to remember pulp fiction, these were basically the middle grade version of that: cheaply printed novellas, each under 200 pages, about trashy horror ranging from killer vampires, to serial killers, to dysfunctional family members. What would you get? You'd have to read to find out.

Natasha Preston is a new author to me. I knew she wrote thrillers and I think I even have a book of hers on my Kindle from when it was free years and years ago. I like thrillers but I'm also super picky about them. I don't want them to be predictable and I expect a certain level in the quality of writing. Unfortunately for THE TWIN, it fails on both counts: not only is it predictable as all get out, but the writing is super cheesy, featuring such gems as, "she was as fake as her Louis Vuitton purse."

Our heroine, Ivy, is a plucky TSTL over-achiever, who despite having straight As, takes forEVER to figure out that her twin has it in for her. Her twin is named Iris, and comes to live with Ivy and her dad after their mom dies. You see, their parents are separated and since Ivy and Iris are twins, they just decided to Parent Trap it up and split the kids down the middle, same as everything else.

Something is not right with Iris. She doesn't show any grief about her mother's death-- not in the usual way, anyway-- and doesn't want to talk about their mom or anyone from her previous life. Instead, she wants to talk all about Ivy and her friends. She wants to be in all of Ivy's classes, and even starts hanging out with Ivy's friends-- sometimes without Ivy. Ivy knows that her sister has suffered a loss and needs support as much as she does... but how much support is too much? And what happens if someone leans on you so heavily that it feels kind of like they're trying to squash you? Well... Ivy is about to find out exactly what happens.

So, I did make it to the end of this book but I was rolling my eyes the whole way through at the bad writing. I kept hoping that maybe the ending would surprise me or the payoff would be good. But NO. The ending was terrible. I think the author was going for some kind of atypical Gillian Flynn-esque twist, but it just made me mad. Gillian Flynn's characters are brilliant, so those types of endings work because of the characters' twisted brilliance. This was just a carnival of idiocy, so the twist didn't really do anything but underscore just how STUPID everyone in this book really was.

I don't want to say anything more than that, because spoilers, but it's been a while since I was so frustrated with a cast of characters... and not in a good way. Everyone in this book was stupid and awful. In one of my other reviews, I said that I'm OK with characters making bad decisions for good reasons; it's only when they make bad decisions for stupid reasons that it starts to feel less like a carefully devised character flaw and more like subpar writing.

Middle grade readers and younger high school students may enjoy this, but unless you're into the book equivalent of a Lifetime movie or a revistation of the Point Horror novels of your youth, I wouldn't recommend reading this book.