The Scarecrow King by Jill Myles 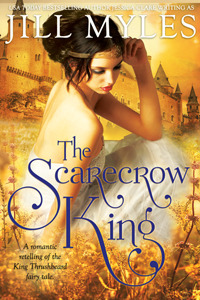 THE SCARECROW KING is such a wonderful story; the whimsy, fantastic elements, and strong female protagonist reminded me so strongly of the books that I enjoyed reading as a young girl, only all grown up-- basically, what I'm trying to say is that this book is like ELLA ENCHANTED and CATHERINE, CALLED BIRDY for grownups. And really, how can you beat that? You can't.

This isn't my first Jill Myles rodeo. That honor goes to QUEEN OF BLOOD, an incredibly sexy romance about an arranged marriage between a human and a vampire amidst a background of rebellion and court intrigue. I fell in love with it virtually from page one and made all my friends read it, including my fellow vampire fan, Heather Crews, who, in turn, returned the favor of reccing good books by suggesting we read SCARECROW as our next BR.

Rinda is the unloved daughter of a commoner who married a king by deception. She has brown hair and a "lame" magic power that pales in comparison to the golden beauty and water-finding magic of her sister. When their father decides that they're both to be married, Rinda decides to ruin things by insulting all her suitors and acting like a major brat. It's incredibly funny just how well she succeeds at being a total raging bitch; her bitchcraft is fueled by her insecurity, you see, and she has loads.

Well her father gets mad and decides, "Fuck it," and that he'll marry her off to the first man who walks in through the door-- which turns out to be a tone-deaf soldier-turned-minstrel from the poorer kingdom next door who's in the midst of a political upheaval themselves. His name is Aleksandr and he's a total babe of a beta hero. Normally the "nice guys" in romance novels end up coming off as spineless or sleazy but I adored him the moment he set foot on the page. Rinda, however... doesn't.

THE SCARECROW KING is not just a romance novel. It's a story of a girl learning to love herself and develop confidence. The hero doesn't save the heroine in this one-- she saves him, and she does a really incredible job of it. In the author's note, Myles said that the fairytale she based this off had misogynistic undertones and she decided to make it empowering. And honestly, the strong heroine who is so flawed is really what makes this story. THE SCARECROW KING shows how having people tell you you're inferior your whole life can really warp and destroy you, even when you're actually amazing; and how it isn't enough to have people just tell you how awesome you are-- you need to learn that lesson for yourself, internalize it, and embrace it... as well as yourself.

It pains me that Jill Myles's work seems to be so underappreciated. She's definitely a hidden gem in the fantasy romance world in desperate need of unearthing. Arranged marriage romances are probably one of my favorite tropes in the fantasy romance genre, but it's hard to find authors who really carry it off with finesse. But Myles is that one in a hundred who does and I'm happy to worship her for it. I hope she decides to write more of these charming fantasy romances; I'd eat them all up.