The Unexpected Spy: From the CIA to the FBI, My Secret Life Taking Down Some of the World's Most Notorious Terrorists by Tracy Walder 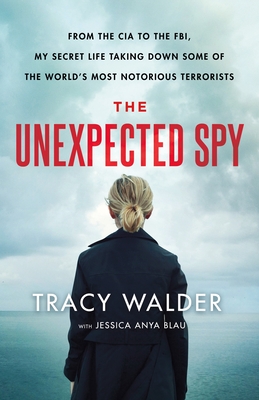 The only other spy memoir I've read was Valerie Plame's FAIR GAME, which was really good, although irritatingly, large sections of the memoir had been redacted for security purposes by the CIA. The CIA is a jerk like that. I figured that since Tracy Walder not only worked for the CIA but also the FBI, something similar would happen here. I was not wrong. Portions of THE UNEXPECTED SPY were redacted, although not as significantly. Maybe because Tracy Walder was doing less sensitive work? Or because she was significantly less high profile? Either way.

It's difficult to review memoirs because while in many cases, it's possible to divorce the author from their body of work if you try hard enough to compartmentalize, that's not really possible to do with memoirs because the memoir is essentially the person-- or at least, a part of the person: the one they're willing to share with the public. And when you don't really like the person writing the memoir, it's really difficult to like the memoir. Because, again, the main "character" of the book is literally the person writing it.

An alternate working title for this book could be Humblebrag: The Musical. Why "The Musical"? Because this author wouldn't stop singing her own praises. Look, I'm capable of girling out as much as the next lady, but Walder was SO ANNOYING about it. I didn't really need to know that she wore mascara every day while deployed or made her mom schedule hair salon appointments for her every time she came back from a mission, or how long and blonde her hair was (like 90% of other sorority sisters, she's quick to tell us), and how she's so attractive and blonde, everyone notices her, including FBI scum bags who make her write a literal apology letter for wearing a fitting suit (what).

Look, I know girly girls get a lot of hate and women aren't allowed to build themselves up in society without being crushed down, so I tried to take a look deep inside myself and ask: was I feeding (however unintentionally) into internalized misogyny? But no, I don't think so. There was a lot of back-patting-- more than James Comey's A HIGHER LOYALTY, which had me rolling my eyes from page one (ok, more like page 20). Whether it's her brag about being immune to pepper-spray, or her brag about being one of the guys, or a brag about how she's never done anything illegal (except for the undocumented cleaning lady whom she totally throws under the bus when she thinks the agent interviewing her is on to her super illegal actions), it's just a non-stop brag fest.

OH, and she is privileged as all get out. The way she excuses enhanced interrogation techniques (torture), praises the Dub (saying she'd vote for him despite being a Democrat) and whines about the discrimination she received from people hating on her for being Californian and, oh yes, blonde, and let's not forget the cleaning lady she outted, while talking about the buckets of makeup she wears all the time, I was just so done with this lady and her blithe ignorance of her own over-bloated sense of self-worth. There is an actual passage in here where she and this other lady are actually talking about whether or not they should wear eye makeup to the pepper-spray test FBI agents apparently have to go through, so they know how it feels to be maced (hence how she figured out her resistance).

Kudos to her for taking on a position in a role that typically has a boys' club vibe (or did at the time), for calling out institutional sexism (despite caving to it out of necessity), and for taking pride in her own accomplishments. I just really hated the arrogant self-satisfied down in which this was written. The spy stuff was cool but all the redacted passages do break up the narrative in a jarring way, and you just know that the CIA took out all the juicy bits. Giving credit where credit is due, though, it was satisfying to see her acknowledge that the Iraq invasion was largely responsible for the formation of ISIS. I'm sure it's not easy being in a government agency but I'm not sure it attracts likable people.