Glop: Nontoxic, Expensive Ideas That Will Make You Look Ridiculous and Feel Pretentious by Gabrielle Moss 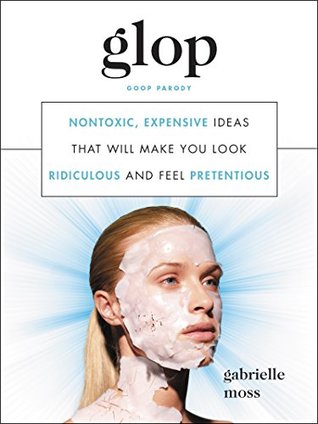 After reading and loving this author's other book, PAPERBACK CRUSH, I immediately went to see what other glorious titles she might have in her backlist. I came across this scathing Gwyneth Paltrow parody book, and seeing that it was also on sale for an affordable $2.99, I went ahead and bought a copy because I think we can all agree that some celebrities basically make fun of themselves-- but it's far more fun to see other people do it with a bit more panache.

Gwyneth Paltrow isn't just a celebrity, she's an influencer with a lifestyle brand she calls "Goop." Maybe you've heard of it. There's a TV show right now called Goop Lab, which is kind of like BuzzFeed's "try it" videos but for privileged, fully-grown adults. On her website, you can find items like $3000 yurts, semiprecious gemstone "vaginal eggs," and candles that allegedly smell like her secret garden (no, not an actual garden) and run about $150 a pop.

I think part of what it makes it so annoying is that she couches all this baseless consumerism in pseudo-science, privilege, and cobbled-together new age philosophies that serve as a pastiche of superficial scrapings from far deeper sources. No matter how authentic an influencer seems, there's always a reward, whether it's an endorsement deal or a free product. GLOP takes that oddly hypocritical sanctimoniousness that makes up Goop's core brand and runs with it, in a book that will teach you mindfulness but only if you're willing to pay for it.

GLOP is pretty funny... at first. It feels a bit like a BuzzFeed listicle that was padded out to fill a book. Some portions are better than others, although I feel like the chapters were longer than they needed to be in some cases. Seeing ridiculous recipes and weird names played out over and over again felt a little one note. The cover also leads you to think that this book will feature comedic imagery; it does not. All of the photos, while situationally appropriate, are from stock imagery sites.

If you feel incredibly annoyed by Gwyneth Paltrow and want to see someone mock her for everything from her business acumen to her personal life, then this is the book for you. I said in a status update on Twitter that it's easy to make fun of Gwyneth and it never really gets old because it seems like she's always plugging or doing or saying something that basically lends itself to mockery. But if you were hoping for a sophisticated attempt at satire that delved a bit deeper than the surface and featured meme-like images of ridiculous beauty "treatments," this book is not that. I wish it was, because it would probably be a much funnier book. This one was just okay.