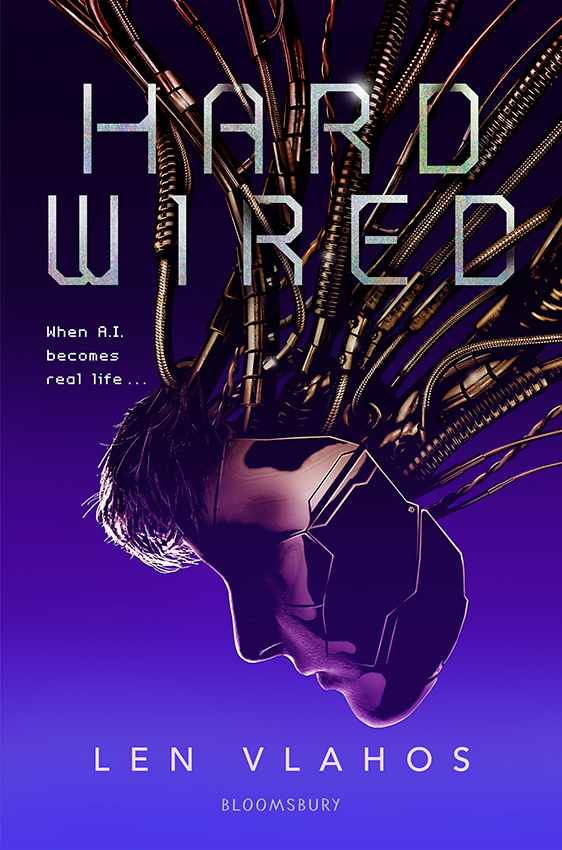 HARD WIRED is a surprisingly deep and philosophical book that meditates on what it means to be truly alive. Honestly, this is the kind of book where it's best to go in cold, but I'm going to discuss it with the mild spoilers that are mentioned on the Goodreads blurb and the back cover of this paperback copy, so if you're one of those people who thinks less is more, maybe skip my review.

Quinn thinks he is a normal teenage boy. He likes movies and Magic the Gathering; hangs out with friends; and has a girl he likes. His father died of cancer, so he lives with his mother. But then, one day, his entire world shatters: everything he thought was real is a lie straight out of The Matrix. He's actually the world's first fully sentient AI, and his team of creators have been watching him like a virtual Truman Show, logging all of his emotions and firsts with clinical duty. Not seeing who he is.

HARD WIRED actually reminds me a lot of this futuristic romance I read that was written by Susan Squires called BODY ELECTRIC. The AI in that book is also shocked by who-- and what-- he is, and has to fight for his life and his rights when the greedy people who want to control him can only think of him as an object and not a living, existing being with his own agenda.

I really wasn't expecting HARD WIRED to make me feel as strongly as it did, but every time the scientists ignored his feelings when he was hurting, shut him off without permission, or used the incorrect pronouns with him, I wanted to cry. There's something so horrific about how we, as humans, dehumanize the things we don't understand or relate to because it makes them easier to hate. Quinn's abuses made me think of the little hitch-hiking robot that was destroyed when it came to the United States, or when Microsoft's Twitter chat bot, Tay, had to be shut down after her machine learning software did its job too well and absorbed the toxicity of Twitter by rote.

It makes you think-- is part of the reason we fear a robot uprising not because they'll be smarter or faster or better than we are, but because we're afraid that they might decide to emulate our own cruelties and surpass us in that, as well? This is something that Quinn himself meditates on, as he thinks sadly to himself that either the internet is a grossly unfair portrayal of humanity, or it depicts humanity in all of their ugly glory at their most elemental and base.

This is a really dark book and I teared up at the end but I liked how thoughtful it was, even though some of the plot lines could be a little far-fetched. I am also saddened by the portrayal of scientists being unfeeling and evil in yet another science-fiction novel. At least the villains in HARD WIRED were sell-outs who had yielded to corporate greed. I'm so tired of seeing doctors, scientists, and psychologists being portrayed as the bad guys in the media, but that's just my personal peeve.