Marching Toward Coverage: How Women Can Lead the Fight for Universal Healthcare by Rosemarie Day 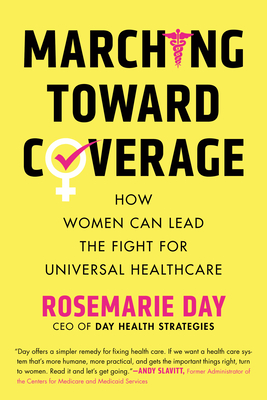 It's amazing how triggered some people get when you bring up healthcare. You would think any sensible person would want their fellow country-people to all be adequately covered, not only for immediate, life-threatening things, but also so they would feel comfortable checking out and getting affordable medication for things like STDs, flu vaccines, antibiotics for infectious but non-threatening diseases, as well as maternity and disability care.

...But no. Apparently people don't want that-- or at least, they don't want to shell out a few more tax dollars to pay for it-- which leaves me to believe that my fellow country-people are perhaps not, shall we say, the most sensible.

Look, I get it, socialism is bad, etc. etc. But MARCHING TOWARDS COVERAGE is not a "hey let's band together and embrace the proletariat" kind of book. It is not even what I would consider a typically feminist book. Instead it is a-- centrist and egalitarian-- look at how we, as a country, can and ought to make healthcare cheaper and more accessible for everyone.

Countries that are comparable to the U.S. in terms of economy and wealth and also have some sort of "universal" or big government healthcare plan can expect their citizens to live about three years longer on average, while also preventing thousands of cases of infant mortality. Some of these countries even offer a blend of privatized and government healthcare, so it isn't even as if the government is fully expected to bear the brunt of all the burden in all of these cases.

Day discusses how high premiums make healthcare more expensive to everyone, which is why it's imperative to get large amounts of healthy people on board. She talks about the importance of not discriminating against preexisting conditions because it can become a death sentence for someone trying to treat something like cancer or diabetes, and the stress of trying to get a job just to be insured (where roughly half of Americans get their health insurance-- through work).

I'm giving it three stars because it's pretty dry, but I think it's helpful in understanding how the U.S. developed the healthcare system it did, what works, what doesn't, and why it's important to fix it.