Love You to Death by Bebe Faas Rice 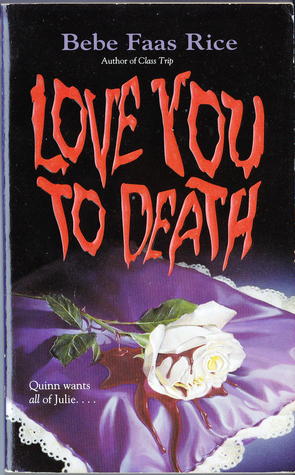 LOVE YOU TO DEATH is... not a great book. It actually reminded me a lot of this direct-to-VHS movie I watched in middle school called Devil's Pond. It's one of those blink-and-you'll-miss-it bombs, starring, bizarrely enough, Tara Reid and Kip Pardue. They're a newlywed couple spending their honeymoon on a creepy island in a swamp. When the two weeks are over, Reid finds out that Pardue intends to keep her in his swamp forever, and that his love for her is... shall we say, unhealthy. Psychotic, even. Oops.

The whole time you're watching it, you can't help but wonder-- woman, did you not see the entire color guard parade he hired to twirl all those red flags at you??  But psychological thrillers would not be the booming enterprise they are if they did not capitalize on the viewer's willingness to suspend disbelief when it comes to the stupidity of the victim. I would know, after all, being a part of that whole "TSTL for Days" crowd. So many of my own books necessitate that you're willing to believe that, yes, the heroine really can be that naive.

Anyway, LOVE YOU TO DEATH is like a YA version of Devil's Pond. Julie is the sweet innocent girl in her group of Southern friends, led by Queen Bee Tara, descendant of plantation owners and founders of the town they all live in. When the hot, new-in-school bad boy swaggers his broody way through the gates, Tara is on him faster than you can say "frankly my dear, I don't give a damn," but Quinn only has eyes for Tara, leading to a schism between Julie and the rest of her jealous clique.

But Quinn is possessive and he has a temper. He's also psychotic AF, with mood swings, paranoia, and a bizarre fixation on another girl, a girl named Alison. Julie soon finds herself trapped in a horrific nightmare as she's alienated from friends and family, and people around her start turning up dead. She soon (lol) suspects that Quinn might be involved, but how far will he go to keep her as his?

I began skimming towards the end because it started to get so dramatic and wasn't written very well, in my opinion. I rolled my eyes at the hammy dialogue. The ending was so weird and way too neat, and the murders were not very suspenseful. It was kind of like watching a car crash... or a bad Lifetime movie. You know you're looking at something that is objectively horrible but find yourself a captive audience to the shit show that is in front of you. I was just invested enough that I felt the need to see this book to the end... and the ending wasn't great, either. It just kind of fizzles.