Vixen in Velvet by Fern Michaels 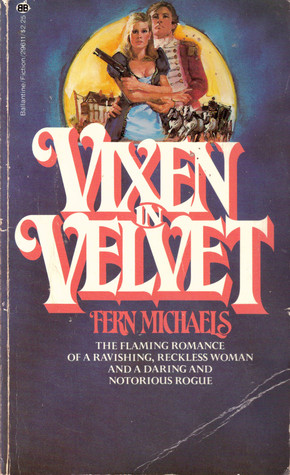 I got this book in an omnibus of Fern Michaels's two earlier works, called FATE & FORTUNE, which contains both VIXEN IN VELVET and WHITEFIRE.

VIXEN IN VELVET is a story about a girl named Tori who is engaged to be married to a much, much older man. Being a firebrand, she is naturally not happy about this, and spends the weeks leading up to her wedding sulking and pouting and trying to figure a way to get out of it. Help comes unexpectedly in the form of her maid, who tells her a story of a tavern wench nearby who could easily pass as her doppelganger. Enlisting the help of her cousin, Granger, Tori goes to the tavern and persuades the girl, whose name is Dolly, to take her place at the wedding and let her live the free and completely-problem-less life of a tavern wench in her stead.

Dolly agrees to this one-sided bargain, and Tori realizes how screwed she is when all the men at the tavern try to harass her, she's living in a scummy apartment with the rent unpaid, and she actually has to work hard on an empty stomach. Her cousin was supposed to come see her and help her, but he flaked, and just when you think it can't get any worse, it turns out that Dolly was lovers with a feared highwayman named Scarblade who decides to pay Tori a visit.

Scarblade, called such because of an S-shaped wound on his face, is actually using his money to gather funding for the colonists during the Revolutionary War. He's not actually that terrifying, and is a great hit with the ladies (who apparently sometimes actually want him to rob him, just so he'll paw through their clothing, lol). He met Tori when she was young, and he was robbing her family, and she was struck by his free and imposing spirit, and she's just as struck by him a second time.

Also, unexpected bonus for this era: he doesn't rape her. I'm not sure if that's because this book was rewritten for a discerning modern audience in the new Kindle edition, and maybe there was rape in the earlier editions published in the 1970s, but in the edition published in VIXEN IN VELVET, at least, Scarblade is a perfect gentleman and doesn't take advantage of her. Woo!

I wanted to like this book. I wasn't prepared for the tone, which is unexpectedly comical. Tori's shenanigans had me smiling in the beginning of the book. I think the problem is that this book wants to have the dark and dangerous high stakes adventures of its more grim predecessors, but doesn't fully commit. So when Scarblade gets imprisoned and Tori has to seduce a disgusting guard, for example, you never really fear for the characters as you might in a book where the author is a gleeful sadist, because the light tone of the novel makes you know that nothing bad will happen. Tori is also an exhausting heroine and eventually her antics got old.

Honestly, VIXEN IN VELVET is a "bodice-ripper" for people who don't like bodice-rippers. If you want the vibe of a bodice-ripper, without any of the horror or rape, this is a book for you. I thought it was kind of boring, but I do appreciate that this will work for some people who aren't me.