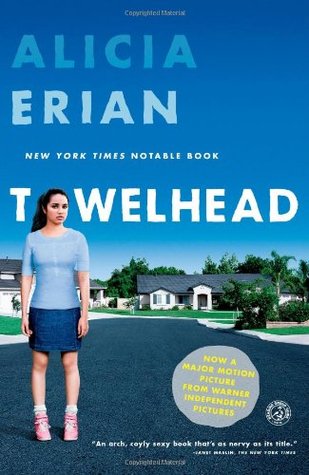 This is one of those books that is going to make you really, really uncomfortable, like TAMPA, INDECENT, or WHITE OLEANDER. Child sexual abuse is a tough subject and any time a novel revolves entirely around that concept, things are going to be icky. You know what you're in for from the very beginning, when Jasira's mother sends her away for "seducing" her boyfriend into shaving her pubic area, blaming her child instead of the man. Jasira ends up living with her father in the Texas suburbs, filled with a strange blend of guilt, confusion, and resentment.

Jasira is half-Lebanese and half-Irish. Her biraciality leads to a lot of interesting and important dialogues that I didn't pick up on the first time I read this book as a teenager. For example, Jasira's father at one point implies that he can't be racist because of his brown skin but then gets very angry at the idea that they are "black" and insists that Middle Eastern means being white. Jasira's boyfriend in the book is black, and her father is infuriated by that and can't seem to see the hypocrisy seeing as his ex-wife was white and that he is also a man of color facing many struggles. There's also some pretty interesting discussions about the Gulf War and how that affected many Americans' perceptions of Muslim-Americans or Middle Eastern-Americans which are still relevant with regard to many xenophobic and racially charged post-9/11 stereotypes that endure to this day.

Jasira's father lives next to a bigoted army reservist named Mr. Vuoso who ends up grooming and then later, sexually abusing Jasira. Jasira's boyfriend, Thomas, also takes advantage of her. That's an interesting dichotomy: what abuse looks like at the peer level, and what it looks like at the guardian level. Both of Jasira's parents are also abusive in their own way - her father is physically abusive, and her mother is neglectful and oddly jealous of her daughter's relationships, romantic and filial. Jasira is so starved for affection and woefully ignorant of sex, and how it's supposed to work, and it's really heart-breaking how her abuser takes advantage and ends up worming his way into her life.

I feel like the best way to read this book is to read it like LOLITA - read it like LOLITA in the "correct" way, that is. A lot of people who read LOLITA take it at face value, and think, "Wow, that child was a harlot, seducing that older man like that!" But Jasira's other lovely neighbors, Melina and Gil, who actually end up providing shelter for her when she needs it, have a different perspective that makes Jasira's unreliable narration a little easier to read: a child who has sex with an adult, even if he or she claims to want it, is still a victim of rape because the adult should know better. Jasira was confused and didn't know what she wanted, and really wanted someone to say no to her and protect her and instead ended up becoming a victim to a predatory adult who wouldn't stop.

There's a movie based on the book that's a bit old, now. The cast looks good and it has good reviews, but I imagine it'd be hard to watch. TOWELHEAD is definitely not an easy read - even the title, which is a slur that is thrown at Jasira several times over the course of the novel, makes this a difficult book to discuss. I did enjoy it a lot though and found Jasira to be a compelling narrator. If you're into books like WHITE OLEANDER, you'll probably really enjoy TOWELHEAD.