Child of Darkness by Jennifer Armintrout 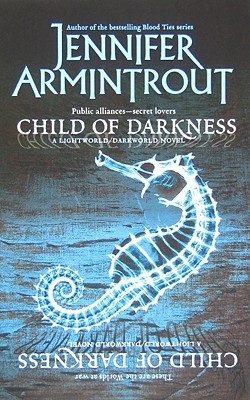 Everyone on my friends list is bitching about Game of Thrones and threatening to cancel their HBO subscriptions. Meanwhile, I'm sitting here reading the Lightworld/Darkworld series and shaking my head and thinking, "Nobody in the world knows my suffering." I didn't start this weekend intending to bum myself out, but that's exactly what happened, all thanks to Jennifer Armintrout - and even though that doesn't much look like it, that's a compliment.

Most people know Jennifer Armintrout, now Jenny Trout, for her popular blog about books and pop cultural hot takes. She's also a writer, and I've been diving into her rather underrated faerie fantasy series, Lightworld/Darkworld. QUEENE OF LIGHT, the first book in the series, is about a young faerie assassin named Ayla who starts out as an unwitting pawn in a serious game of thrones, and ends up becoming a powerful queen in her own right, with her star-crossed lover, the fallen angel, Malachi, ruling by her side as royal consort.

Second books are hard, because if a book series does well, each book should assert itself as a complete work in the series that also builds off the world-building established in previous books. My expectations when I picked up CHILD OF DARKNESS were low, because I've read a lot of really bad second books - second book syndrome is a serious problem in the literary world - but this book, like the previous one, surprised me. In fact, after thinking about it long and hard, I actually think I liked this book better.

CHILD OF DARKNESS is a much different book from QUEENE OF LIGHT. QUEENE follows the typical rise of the underdog storyline, even if it does it with a slightly untraditional style of fantasy setting. CHILD OF DARKNESS is about Ayla, twenty years in the future. Her mortal consort is aging and even though she physically looks the same, ruling has made her colder and virtually unrecognizable from her younger, idealistic self. She's also struggling with motherhood and the problems of raising a daughter who's chafing at her constraints and expectations. It actually reminds me of this movie I used to have on VHS, called The Little Mermaid II: Return to the Sea.

In Little Mermaid II, Ariel has walled off Eric's kingdom from the rest of the ocean and has forbidden her daughter, Melody, from the water, because Ursula's younger sister has threatened them all with revenge. Obviously, making the ocean forbidden actually ends up making it irresistible and Melody ultimately ends up making the inverse bargain that her mother made, trading her legs for a tail. CHILD OF DARKNESS is similar in that in trying to protect her daughter, Cerridwen, and keep her from the Darkworld, Cerridwen becomes an expert in dodging her guards and wandering into the Darkworld in disguise, where she ends up falling for one of the Dark Elves that her own Lightworld kingdom is on the verge of going to war with. Her flouting of convention is much like her mother's, and yet in her own pride, Ayla doesn't see this until it's almost too late.

There's also a new fantastic villain in this book - waterhorses. I was wondering about the seahorse on the cover, and it's excellent foreshadowing, because waterhorses are terrifying. I thought nothing was going to surpass the heart-trees in UPROOTED in terms of things that authors have invented to give me nightmares, but Jennifer Armintrout gladly rises to the task and she succeeds - horribly. (Also, it just occurred to me that the neon colors are probably supposed to be a nod to the "other sight," in the book, the ability of the Faeries to see life energy written out in pulses of light - neat.)

But amid all the horror and the intrigue and the life lessons, there's also some truly poignant emotional scenes that you don't often see in fantasy novels (especially fantasy novels written by men). The scene when Malachi goes to the sacred pool where he made love to Ayla in the first book and prays to her gods knowing that he might die in the final battle. The scene when Cerridwen realizes who her father really is when he's about to die. Basically any scene involving my poor, darling Cedric in this book, but especially the scene when he comes to the abandoned Gypsy camp. I didn't expect all the deaths and betrayals to weigh so heavily on me, but they so totally did.