The Price of Salt by Patricia Highsmith 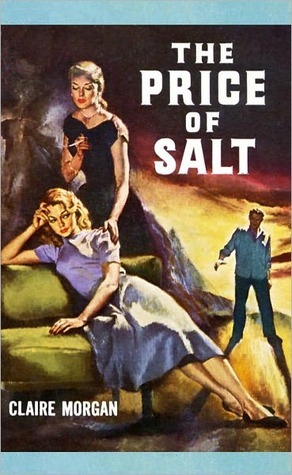 THE PRICE OF SALT is an important book in the LGBT+ literary canon because it was one of the few exceptions in the sea of lesbian pulp fiction published during the 50s and 60s where neither of the heroines ended up married off, dead, or institutionalized. No matter how dull or lackluster it seems today, one can only imagine how many feathers were ruffled - especially since many of these authors were explicitly told that in order to avoid censorship, the lesbian characters could not have a happy ending. Was this book banned? Probably. But it's far more enjoyable to think about all the young (and old) women who read this book and felt validated.

I wanted to read this book after watching Vox's amazing video, Why so many queer female characters die on TV. The video delves into the whole "Bury Your Gays" trope, and was a response to Lexa's death on the popular TV show, The 100, and why it's so harmful. In the video, Vox traces the Bury Your Gays trope back to the lesbian pulp fiction period, and cites THE PRICE OF SALT, and its movie adaptation, Carol, as a rare example of a happy ending in the genre.

Therese designs cardboard sets and works in the toy section of a department store. She's dating a dilettante painter who's basically using his hobby as a way to run away from his daddy. One day, a well-dressed and impressive woman named Carol purchases a doll from her counter, and Therese is moved to write her a personalized card, telling her what a pleasure it was to service her (heh). The two of them end up in a relationship, one that starts out as a mentor/friendship affair and quickly becomes something more, propelled by Therese's obsessive and youthful fascination.

This being the time period that it was, though, neither Carol's husband nor Therese's boyfriend are quite willing to let them go, and it isn't long before their romantic getaway is spoiled by a hired detective who tries to use proof of their illicit affair as leverage to block Carol from seeing her child. It seems like THE PRICE OF SALT is going to take the usual turn, and force the women onto the correct and virtuous path of heterosexual salvation - but that's where things get interesting.

I wanted to like this book a lot more than I did. I know this author can write - I loved her Mr. Ripley series and its gleefully sociopathic antihero. This is a very different style of story-telling and I'm not sure it ages quite as well. The plot is slow and plodding, and Therese is a hard narrator to like. She's very whiny and self-centered, and a bit of a hypocrite, too. During one of her whine-sprees, she's complaining about how Richard, her boyfriend, feels entitled to her, because he was the first to sleep with her and naturally assumes that this means marriage. Granted, this is annoying, classic Chad the Incel behavior, and it's disgusting - but then she kind of does the same thing with Carol, seeming to assume that she's the first woman Carol's been with and getting upset and jealous when she finds out that there's been others, even though it's clear that these relationships aren't ongoing anymore.