King of the Unblessed by Michelle M. Pillow 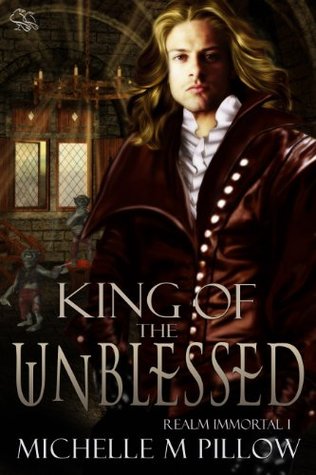 KING OF THE UNBLESSED is basically unlicensed Labyrinth fic. The heroine, Julianna, catches the attention of a goblin king named Merrick while performing stories for children. She wishes that someone would give her an adventure before she has to settle down and marry the man her father arranged for her. The goblin king can transform into a bird and fly around in the mortal world. The goblin king kidnaps the children she was reading the stories to and gives her a time limit to find his castle before it's too late - and he destroys them and her in a fit of pique. A gang of well-meaning creatures befriend her on her journey and help her navigate the various traps and pitfalls he's set out for her.

This. Is. Labyrinth. Fanfiction.

And you know what? I'd be perfectly okay with that if it were good Labyrinth fanfiction. But it isn't. I made it about 10% further than my friend Heather did, but I agree with her review. Merrick is no Jareth. Initially I was very much "oh, yeah!" with all his "she will be mine or perish!" talk, but it turns out that he's a big old softie who thinks with his dick, so that whole shtick went out the window. Also, the jealousy was not done very well. He's an immortal fae, so why is he acting so insecure?

Julianna was also not a very good heroine. Part of what made Sarah so appealing in Labyrinth was her selfishness and her childishness. She was a fanciful teenager who had one step in the fantasies of her childhood. It's a coming of age story, in a way; her fantasies grew up with her right before she was about to outgrow them entirely, and at the end of the movie, she's far more mature than she was in the beginning of her heroine's journey, but she's also, it's implied, learned to embrace her fantasies as well without letting them consume or "rule" her. Julianna isn't childish; she's a freaking child. The reactions she had to situations and her utter willingness to fall at the feet of Merrick like a limp rag had me rolling my eyes. From the first shed tear, I knew exactly what kind of heroine she'd be.

The only redeeming part of the story for me was the relationship between Lucien and Mia. Lucien was sexy and evil AF, and more like what I was expecting from the hero of this story, and I liked Mia. Even though she was held captive from her own poorly-thought-out bargain with the demon king, she at least had a little bit of fire in her and didn't spend the whole time mooning and crying. Why couldn't the book be about their story instead, I asked myself, while exiting out of the book.

For better Labyrinthine reads, check out my "you-remind-me-of-the-babe" shelf on Goodreads.