Into The Fire by Anne Stuart 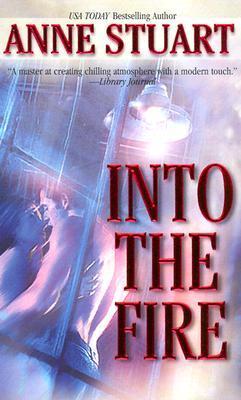 I'd heard that this was one of Anne Stuart's not-so-great efforts, but several friends recommended it to me anyway because they know I'm a sucker for cruel heroes. In this regard, at least, INTO THE FIRE doesn't disappoint. Dillon Gaynor is a rapey alphahole of the first degree, in that hulking, sociopathic Neanderthal way that was made popular in the 80s and 90s by authors like Sandra Brown and Linda Howard. If you're into that, you're in luck.

The heroine, Jamie, is a sheltered innocent: the adopted daughter in a privileged family. Her cousin Nate has just been murdered and everyone thinks that his ex-best friend, Dillon, did it. Jamie's mother sends Jamie over to his house to pick up Nate's belongings, because nothing says parental love like setting up your daughter like a sacrificial offering to pick up the tithes you require for the shrine you're building in homage to the child you wish you had instead.

Fully aware of this favoritism and not liking it, Jamie's life gets even more suck when her car breaks down in front of Dillon's house. When she first meets him, he's pounding the face of someone who tried to cheat him at poker, which is not exactly a tickmark in the "I'm innocent" column.

Jamie tries to fight her lingering attraction to Dillon, despite the fact that he basically molested her when she was underage, and despite the fact that he handed her off to a high school jock who then raped her. Jamie has very warped ideas about sex and consent, and so does this book. The interactions between Jamie and Dillon are going to make a lot of people mad. I read this like it was a bodice-ripper, and took it as a fantasy, but it's still quite triggering. Readers, beware.

I think the twist about the villain is also going to make people angry. The LGBT+ are often demonized in fiction, and this book is no exception. Making villains queer or coding them as queer in the literary subtext has been tool that many authors have been using for a while as a cheap way to titillate and horrify. This book was published a while ago, and in that, it's definitely a product of its homophobic time. I took that with a grain of salt, too, because, again, I read bodice-rippers.

INTO THE FIRE is not a great book, but it entertained me, it had great sexual tension, and it told a pretty messed up story. I think if you're interested in reading another "Did He Do It?" murder romance about disturbed families, Anne Stuart's other book, NIGHTFALL, is a far better choice.