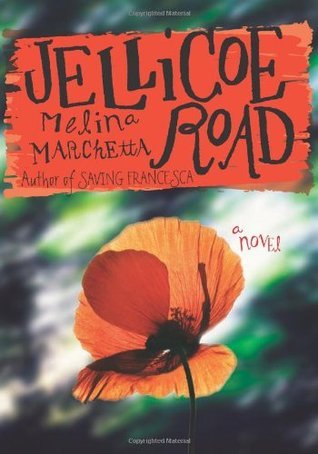 People swear by this book; they want to make it their god. Well, if this book is a religion, then I'm an atheist, because there was absolutely nothing in this book I want to believe in. Did we all read the same book? Man, the author is lucky that books don't have hotlines where you can phone in to complain about your lack of customer satisfaction, because I'd be on the line right now, saying, "Dafuque-ce que c'est?" Comme ça.

JELLICOE ROAD is an utterly nonsensical book that appears to thrive on its own pretension. Taylor, the main character, spends all of her time either whining or crying, and her biggest claim to fame is that she's in charge of this stupid mock-war her school fights with the locals and the local military school for "territory." If that sounds confusing, don't worry - it's never explained, it doesn't make sense, and it's just as childish and lame as it sounds. Oh, and she's in love with the local bad boy military student who ~betrayed~ her once, many a summer ago.

Looped in with this Risk LARPing is the story of some other pretentious kids with ~issues~ who are connected with Taylor's story in a mysterious way. This other POV was incredibly boring and I skimmed it, and yes, the payoff was just as disappointing as I'd imagined it would be, and surprise, surprise, I was able to predict most of it. I'm guessing this is the part of the story that made people shed tears, but mostly I just thought it was lame. And pretentious.

I guess if you want to read about the most boring LARP session ever with a tepid love story that makes TWILIGHT seem deep and profound by comparison, read this book. If you're looking for the profound and live-changing story that was beautifully written and so moving and unique, take me with you, because I finished this book and I didn't find that story. Maybe it's on the Jellicoe Road...