The Opportunist by Tarryn Fisher 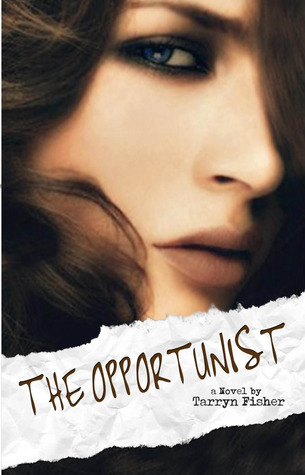 💙 I read this for the Unapologetic Romance Readers' New Years 2018 Reading Challenge, for the category of: Second Chance Romance. For more info on this challenge, click here. 💙

A lot of my fellow romance-lovers enjoy cute, fluffy romances that make them smile. Not me - I like my romance novels to make me feel like I've been sucker-punched in the solar plexus half a dozen times before throwing me out on my ass in the middle of a busy sidewalk. That's why I chose THE OPPORTUNIST as my "second chance romance"; when it comes to messed-up romance novels, Tarryn Fisher invariably delivers.

Our main couple, Olivia and Caleb, are epic trash people, and this is their saga of dumpster-worthy decisions. They first hooked up in college, but only after Olivia schemed, lied, and stalked her way into his heart, even going so far as to screw over his then-pregnant girlfriend by spilling out all of her dirty laundry. I saw a meme earlier that said "All Tea, All Shade" - that's Olivia. She's scandal wrapped in an ill-fitting dress. You can't quite hate her because her life is so awful, but you can't really stand to be around her, either.

It's told in dual timeline format, with the present story being written in present tense and the past story written in past tense, which can be a little confusing (especially since sometimes the author forgets which story she's telling, and slips into the wrong "tense"). This format is used to conceal information from the reader, because in the current story, Caleb, now with a different girlfriend, has amnesia, and Olivia, schemer that she is, takes advantage of his delicate condition in order to worm her way back into his heart a second time. We know that when they last parted, Caleb hated her for some unforgivable transgression, but we don't know what. All that we do know is that Olivia is one sick puppy... and as we read on, we find out Caleb is, as well. Maybe worse than we think.

The last third of the story gets extra weird and a little unbelievable, but I just decided to roll with it. MUD VEIN and MARROW did the same thing. Tarryn Fisher seems to be making "jumping the shark" her trademark, and somehow she makes it work, even if you secretly admit to yourself that what's happening is a little stupid. The "past" story was the embodiment of virtually every negative new adult stereotype that I hate, but somehow Fisher made that work, too. I think it works because she doesn't try to apologize for being over-the-top or writing trash people characters. She just writes them and lets them tell their story themselves, rather than wasting time trying to apologize for them. ATHEISTS WHO KNEEL AND PRAY also featured a cast of incredibly repulsive characters, but I liked that book more than I should have, because it was compelling and unapologetic.

This definitely feels more unpolished than MUD VEIN and MARROW (both of which I believe were published later), and I noticed more errors in THE OPPORTUNIST, as well. There is also a higher rate of awkward metaphors that sound like something you might expect to see in a high school creative writing class, some notable ones comparing a dude to a shiny pepper she wants to take a bite out of and mouths clashing together like thunderclouds. *eye roll* But if you can get over the negative tropes and the unlikable people and the OTT drama, this is actually a riveting read. I devoured it in just a few hours and was frankly amazed at how quickly those pages turned. I own the two sequels and am excited to see what dark and reeking twisted alleys this story takes next.