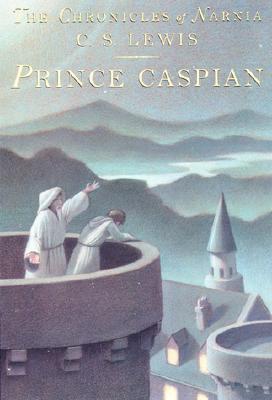 I recently decided to reread the Narnia series, only I decided to go about it in chronological order instead of publication order. What does this change? It means you read THE MAGICIAN'S NEPHEW first, instead of THE LION, THE WITCH AND THE WARDROBE, that there's a book about totally random characters sandwiched in between TLTW (THE HORSE AND HIS BOY) before the series settles back into the usual order.

I never really liked PRINCE CASPIAN before. I tried reading it as a teenager and ended up not finishing, and in the BBC series based on these books (which I watched many times), parts of the Prince Caspian TV movie were almost unwatchable because the battle scenes were so tedious. I think that's where this book chiefly differs from the other books, which are more adventure-type stories, whereas this is like a child's version of GoT.


The Pevensie kids are all waiting at a train station to be sent to boarding school when they find themselves sucked back into Narnia. Or, at least, what they think is Narnia, because it's completely different from the Narnia they knew. As it turns out, several hundred years have gone by since they ended up returning home via the Lantern Wastes, and magic has all but been forgotten. They find out from a dwarf that these invaders called "Telmarines" appeared in Narnia one day and assumed rule, and while the current heir is Prince Caspian, his evil uncle has staged a coup to assume regent, and since his wife is pregnant, plans to kill off Caspian, too.

All of the talking animals and magic creatures have been forced into hiding, but they are about to come out and stage a civil war. Caspian, who has Susan's magic horn (you know, the one Aslan gave to her instead of a weapon because he sucks), brought her, Peter, Lucy, and Edmund here just in time for the final battle, which ends up being weirdly anticlimactic. Then things get weirder.

I didn't really liked the characters in this book that much. It was like all the development they underwent in TLTW had flown out the window. Susan, in particular, is portrayed as a raging you-know-what, whereas Peter is even more condescending, and Lucy even more sulky when she doesn't get her way. Edmund was actually decent here, and I think it's probably because his actions in TLTW ironically made him a much better person, because he's still haunted by his bad choices. Prince Caspian wasn't much better. He was very immature. I liked him much better in the TV movie.

Also, does anyone else think it's weird/unfair that at this point, Susan and Peter are told that they can never come back to Narnia because they're too old? What does that mean? The Telmarines were all much older when they came to Narnia, so presumably age is not an issue. Peter drops it so casually, too, and doesn't go into detail or seem much bothered about it at all, when you would think that such a reveal would be utterly devastating. After all, if you consider the end of TLTW canon, Peter actually spent decades living in Narnia, becoming an adult before reverting back to a boy (what), so he really did spend half his life here essentially, only to be kicked out by a holier-than-thou lion.

Additionally, I'm super curious about how time works in this series. THE MAGICIAN'S NEPHEW treats us to the genesis of Narnia, and that was about one hundred years before this book (set in Victorian times), and given how time works in Narnia, we can probably assume that was millions of years ago in Narnia times. I think in this book, about a year has passed in between TLTW and PRINCE CASPIAN, which equates to a couple hundred years in Narnia. But then, when the kids find out about the horn, they ask what time it was blown, and the dwarf tells them "Oh, around 9am." And someone - I forget who - says, "Oh, that's the time we were sitting at the train station!" I found that really jarring, because it's been made pretty clear up to that point that time in Narnia doesn't correspond to our world much at all (hence the reason her siblings first thought she was lying when she thought she'd been in Narnia for hours and only a few seconds had gone by). That seems like a pretty egregious mistake. I'm surprised C.S. Lewis's publisher didn't catch that, the first time around.