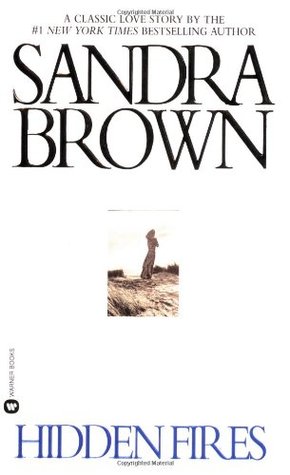 If you're new to following me, one of the things that you should definitely know about me is that I love vintage romance novels. I think they're super fun, partially because they're a snapshot of a different time, when expectations for women (and tolerance for racism and sexism) have become utterly outmoded, and partially because they are cheesy and bad in a way that's hard to find outside of the gamut of self-published and utterly self-indulgent trash-reads.

HIDDEN FIRES is not a good book - in fact, in many ways, it is an objectively bad book - and yet despite loathing parts of it and shaking my head at even more parts of it, I did have fun reading it while internally making fun of it because it is so ridiculous.

Set in the old west (e.g. Texas in what I imagine is the late 1800s), the heroine, Lauren, is a virginal stereotype of propriety wronged: after a corrupt preacher tries to put the moves on her, he manages to gaslight her adoptive family into thinking that she's a harlot. When they try to force a marriage, Lauren flees to the Lockett estate where a man named Ben once extended her an invite to visit. Ben is now dead, and only his wastrel son and icy wife are in residence. In fact, when Lauren first meets the son, Jared, he's on death's door from alcohol poisoning - but he doesn't look so bad that Lauren can't help but admire his hot, heaving bod.

Anyway, both Jared and the wife, Olivia, assume that Lauren is one of Ben's harlots. He actually was matchmaking though, having picked Lauren out for his son, since Lauren isn't his type (read: lusty, buxom, kinky). Jared, however, hates being told what to do, because he is a Real Man, and also because he has major Mommy Issues. Unfortunately, he screws up a railroad deal between his mommers and some real tacky "new money" types, who decide to take the slight personally, and in order to save his reputation, Mommy decides that Jared and Lauren should be married, because she's the perfect foil to Jared, who is a little too good at playing the lusty wastrel with no self-control.

The plot of the railroad deal continues as it's revealed that Jared's mom plans to destroy the Mexican settlement near the river they want to dam up for the railroad in order to prevent dissent, and then there's the "Okie" stereotypes working the land who are probably some of the most repulsively written stereotypes I've seen in a book of white people. Of course they're rapey, incesty redneck hicks, because why wouldn't they be? And in case that isn't enough offense, there's stereotypes aplenty with a dude who's been disfigured by Native Americans (of course) and some questionable portrayals of Mexicans and specifically Mexican women (hint: it's the "exotic and sexual" stereotype), whose sole purpose in the narrative seem to be to showcase Lauren's own white purity.

WTFery continues with several rape/sexual assault attempts, a scene in which Jared attempts to force Lauren to watch a bull being castrated only to cause her to flee and break her horse's leg in the process resulting in approximately 1 dead horse, a scene where Jared and his Mexican buddies start shooting at each other for funsies and Lauren nearly faints because she thinks they're bandits, and a scene in which Lauren after nursing her Mexican servant back to health nearly collapses from exhaustion and Jared takes her to bed, undresses her while she's passed out, thinks, "While I'm here," and helps himself to her bosom while she's unconscious and is rough enough (???) that her body actually stings from washing it the soap the next day. (What the hell was he doing? Also, that's rape, dude.) And while we're talking about sex, I just want to add that the sex scenes in this book are pretty bad, even for an 80s romance novel. We're talking cringe-worthy bad. I have receipts:

[Her nipple] melted against his tongue like a piece of sugar candy, and tasted even sweeter (184).

His ardent lovemaking was followed by a nonchalant, take-it-or-leave-it attitude that challenged every woman's innate feminine instincts. Perversely they loved him for it (205).

She had been a virgin. And it was the first time Jared Lockett had ever been with a virgin. It was a gift he had never expected toreceive and one he didn't feel he deserved, yet she had given herself to him.
Why? After the abuse he had heaped on her, why had she come to him, offering herself? (233)

This is actually a valid question, since the abuse he's referring to is actual abuse. He actually hits her (sort of by accident, but he was shoving her). He constantly emotionally abuses her and makes fun of her. He sexually assaults her and comes close to raping her during at least one point (I think it was two). Oh, and until he finds out that she was a virgin, he still thinks that she slept with his father and he constantly holds that over her head, treating her like she's dirty laundry or worse. Gross.

Emboldened by his impassioned plea, she stroked and caressed until she found the smooth spearhead lubricated with the precious nectar of his desire (270).

In spite of her modest wariness, she felt her muscles surrendering to the diplomacy of his mouth (280).

In answer, she took him in her hand and guided him to the gate of her womanhood. Bathing the pulsating tip with the moistness of her own loins, she led him further into the welcoming folds of her body (356).

Jared is basically the hirsute machismo stereotype of the 80s romance hero mold. If you like Rosemary Rogers, Linda Howard's earlier work, and Diana Palmer, you'll know what you're getting into with this Jared dude. He's super possessive and uncomfortably patriarchal.

Lauren is also a stereotypical virgin without much agency, although she does stick up for the Mexican people and her beloved servant (of course), and she is excellent at nursing people back to health and befriending prickly characters who normally don't like anyone (including Jared). Apart from those two superpowers, she is a foot-stomper, and the author does everything she can to remind us not just how virginal she is, but also how small, and dainty, and helpless, and pretty she is.

You're probably wondering why, with this ranty review, this book isn't getting a 1 star. I've certainly had people come onto some of my other 1-star reviews to express outrage about how I could give X-book a positive review, when they considered it trash, and yet give Y-book, which they considered chock-full of literary merit, a low review. Well, the answer to that is that I rate exclusively on entertainment and joy. If a book makes me happy or engaged, it has done its job, and regardless of the alleged caliber of the writing itself, I will rate it accordingly. HIDDEN FIRES does not get a positive review because I spent the bulk of the book unhappy with the writing, pacing, and characters, but it also does not get a hard 1 because it was unwittingly hilarious at times, and because there were parts of the story where I felt interested (particularly that utter fustercluck of an ending, my God).