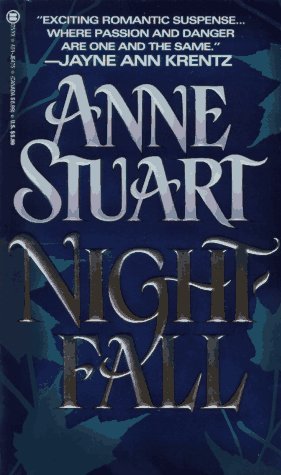 💙 I read this for the Unapologetic Romance Readers' New Years 2018 Reading Challenge, for the category of: Romantic Suspense. For more info on this challenge, click here. 💙

Romantic suspense is kind of a misleading name, because the "romantic" part makes me think of a cozy cop romance, when the truth is usually anything but. Take NIGHTFALL, a story about a man accused of murdering his wife and children, and a woman who is the daughter of the super-shady author writing his "true crime" story.

Cassidy, like most of the nation, has heard about Richard Tiernan and his trial. A man accused of murdering his beautiful wife and two young children, with all evidence pointing to his guilt. Worse; his trial is being expedited because his late wife was the daughter of a beloved war-hero and notable political figurehead. As far as he's concerned, the writing's on the wall, and it says GUILTY in red, dripping letters.

Richard Tiernan is willing to let his story be told by Cassidy's father, but in return, he wants Cassidy. The reasons aren't clear, but it sounds sketchy as hell. Her father doesn't like it, but Richard's story is important to him for reasons that are also made clear as the story goes on, so he agrees to this Faustian bargain over his conscience, inviting his daughter to the very apartment without telling her that it's actually the lion's den. Obviously, this being a romance novel, she finds him darkly fascinating and finds it difficult to reconcile her attraction to him with his possible guilt.

Anne Stuart's first published novel was actually one of those pulpy Gothic romances, and in NIGHTFALL, she goes back to her roots, with a densely atmospheric story that is absolutely mired in whodunnitry, with a sick, utterly disturbing twist that I'm sure made V.C. Andrews sit up in her grave and break out in applause. It's been a while since I was so disturbed by the grand reveal in a book. And this was published by a mainstream publisher? Man, that's ballsy. Just goes to show how quick people are to write these off as fluffy drivel. That was some Game of Thrones level horror.

NIGHTFALL is not one for the fluffies and I'll be the first to admit it has its flaws. The pretense for the hero and heroine meeting is pretty thin, and a little lame, and as my friend Heather pointed out in her review of A ROSE AT MIDNIGHT, her writing can be very repetitive, as she tends to become overly attached to specific phrases (e.g. "he said, very gently"). The hero in this book is also more unpleasant than some of her other heroes, who were blithe, morally grey men cast in the mold of Jareth, from Labyrinth. This guy is more like the OG James Bond, a broken man with a broken moral compass who doesn't value his own life, sees nothing wrong with hitting women if the situation calls for it (warning: he hits the heroine and also the heroine's adolescent sister), and will basically rationalize any sort of unpleasantness if he thinks it is for "the greater good." I find characters like that fascinating, but other romance readers may not. Consider this a warning, please.

Man, I'm still kind of blown away by the ending, and all that doom and gloom. If you're a fan of dark romances and atmospheric tension, this is a must-read. Just keep in mind that the hero is a jerk, and for about 50% of the book, most of the interaction between the hero and the heroine consists of, "Did you murder your wife?" "Maybe." "Do I frighten you?" "Yes." "Good. Want to screw?" "If we must."