Pretty In Ink by Merryn Dexter 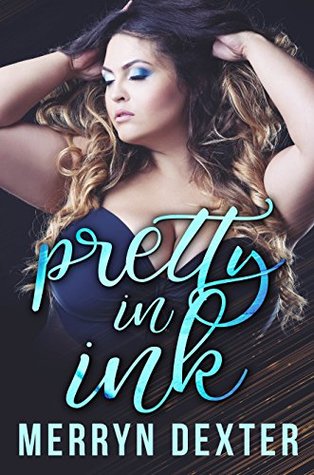 The problem is that these sorts of books usually come across as cliche-ridden and fetishistic. PRETTY IN INK is no exception. Aubrey is rich and overweight. When we meet her, she's at a bar with her skinny-bitch sister who's getting married. They're double-dating (Aubrey's seeing the best man). Aubrey has issues about her weight (and it's suggested that she's this heavy because she eats), but refuses to starve herself to become as slim as her sister. Her entire family is this cliche bunch of villains that demonize her for being heavy, and this loser she's dating actually tries to veto her dinner order at the bar to force her to eat a salad and chicken instead of cheese and steak. It turns out this loser is just dating her for her money and utterly resents her for being fat.

Cut to our hero, Garrett, who loves big women because they give him a "smooth landing" or something like that. He loves curvy women a little too much, actually, because his attraction to Aubrey is simply because she's big, and that makes sex more fun for him. I guess that's fine, but at the same time, he's not really seeing her as a person, but as a plus-sized blow-up doll, and while I get that that is the point of these short, sexual fantasies - objectification, but in a "positive" way - it still feels gross. Particularly since the narrative appears to be trying to belabor the point that Garrett is such a nice guy for willing to date her for herself, and that he's the only one who sees her as a sexual being with feelings and not as some gross blob, so he is validating her very existence, blah, blah, blah.

PRETTY INK INK tries really hard, but the quickie format just doesn't work for the topics it broaches. It made weight-shaming and body image issues feel cheap. Maybe if you enjoy Alexa Riley romances, you'll enjoy this, as they are very similar in tone - there's that same protective alpha, "I MUST CLAIM HER" caveman vibe that their fans seem to love. But if you're expecting something substantial, with good plus-size rep, you're going to be very disappointed.