A Pirate's Love by Johanna Lindsey 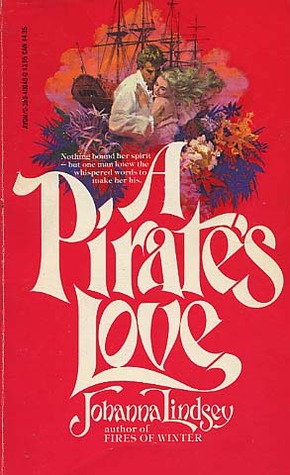 💙 I read this for the Unapologetic Romance Readers' New Years 2018 Reading Challenge, for the category of: Pirate Romance. For more info on this challenge, click here. 💙

Highbrow this is not, but that didn't stop me from buying it and enjoying it. A PIRATE'S LOVE is a 1970s bodice ripper, which you can usually take to mean that it contains a whopping dash of WTF and a hero who quaffs misogyny like he's trying to get drunk on woman-hating. I don't know why I like these books so much but I'm not going to apologize for it, and I'll be the first to admit that they're problematic, but something about them just calls to me. Maybe because they seem fearless of causing offense in a way that many modern-day romances don't, and I admire their ballsiness.

One thing I liked about this book, though, is that for 80% of the book, Bettina gives it to the hero, hard. Her escape attempts were actually pretty effective and she wasn't afraid to maul the hero, even going so far as to knock him unconscious with a wine cask. All of that changes of course when she decides that she loves him and then it's nonstop angst, but for most of the book, I really appreciated her spitfire nature as she has 50% more spine than other heroines in comparable books.

Tristan also has an Inigo Montoya thing going on where he's seeking out the man who scarred his face and killed his father (and his mother). This book actually came out before Princess Bride, but the similarity amused me, and Tristan's ruthless pursuit of Bastida amused me, particularly when the search yields two more plot twists that I didn't see coming - one about Bettina's would-be fiance, and another about her father. I like it when a romance novel surprises me and does more than just set up the main couple, but A PIRATE'S LOVE actually has a pretty wide cast of characters, whether it's Madeline the nursemaid, Jossel the oddly permissive mother, Casey the twinkling-eyed captain, or Jules the ruthless BFF who might hug you just as soon as he might whip you (true story).

I haven't been impressed with most of Johanna Lindsey's books, but I quite liked this one - I liked it even more than I liked CAPTIVE BRIDE. This book has a better hero and heroine and came damn close to 4 stars. I just really didn't like the ending; why does the heroine always need to be tamed?