The Notorious Angel by Patricia Maxwell 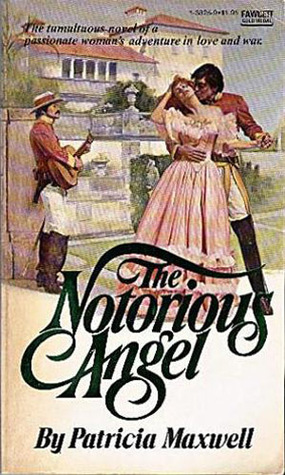 This book is the same as the NOTORIOUS ANGEL you can by in the Kindle store, as published by Jennifer Blake. Jennifer Blake is the pseudonym of Patricia Maxwell. I've tried to figure out whether there's a rhyme or reason to which books get paired with which name and as far as I can tell, it's just an age-thing. Older books were published under this author's real name, and then all later books and rereleases under the pseudonym, Jennifer Blake. I'm obsessed with Jennifer Blake, okay? I built up quite a collection of her work because she often makes them free in the Kindle store, but I'd never actually read any of them, apart from some of her Gothic romances. A few months ago, I decided to try one of her bodice rippers, and I've been hooked ever since.

Her books can be hit or miss but when she nails the formula down, Jennifer Blake/Patricia Maxwell's bodice-rippers are among some of the best and are as addictive as an entire bag of flavored Lays potato chips. You can't stop at just one; you keep going until the bag is empty. I liked this one almost as much as my favorite of hers, ROYAL SEDUCTION, which probably isn't surprising because it has a lot of similarities to ROYAL SEDUCTION.

NOTORIOUS ANGEL starts off a bit rockily with the sibling duo, Jean-Paul and Eleanora selling their home in New Orleans to their relations and leaving for Nicaragua. Jean-Paul plans to become a "soldier-colonist" under William Walker, actual white dude who marched into Latin America citing Manifest Destiny and tried to create slave colonies. Ooooops.

While in Nicaragua, Eleanora, as a single woman, catches the eye of one of the Colonels there, a cruel man nicknamed "Iron Warrior" named Grant Farrell, who assumes that she's a lady of the night. Despite a moral sanctimoniousness that would make Claude Frollo from Hunchback of Notre Dame proud, he finds himself attracted to Eleanora despite himself because obviously. He ends up using her brother against her in order to blackmail her into making an appearance as his mistress for one night to appease his boss, but to Eleanora's horror, he intends on consummating that relationship, too.

This being a bodice-ripper, the first couple scenes between the hero and heroine are not consenting. If that bothers you, you probably shouldn't read this book, as the hero is pretty cruel about it, even going so far as to imprison the heroine in his rooms and deny her clothes. The hero in ROYAL SEDUCTION was cruel, too, but he had better lines. Grant is more terrifying, which makes sense, because he's a high-ranking official in an oppressive martial regime who also heads the firing squad and doesn't shirk from duty, no matter how unpleasant. It is during one of these naked incarceration sessions that her relationship with the other man in this book, a flamboyant soldier named Luis, starts to blossom and they form a sexually-charged friendship that creates all sorts of tension with the highly jealous Grant and comes to head later in the book when he ends up breaking her free from jail.

In some ways, this book reminds me a lot of SWEET SAVAGE LOVE by Rosemary Rogers, with some key differences. Grant doesn't tomcat around. He ditches the woman who was previously angling for his attentions as soon as he gets his hands on Eleanora and remains faithful to her over the course of the novel. Eleanora also doesn't stray, although she is sorely tempted at one point and nearly does, but because of the circumstances, you can really understand why and it's heart-wrenching rather than frustrating. I also think that the action scenes in here are really well done and even when the hero and heroine are separated (and they are for a significant portion in the last quarter of the book), I was still very interested in the events going on. There is a flight through a jungle that had me gnawing on my nails figuratively, desperate to see what kinds of horrors were going to go down.

Eleanora is also a much better character than Rosemary Rogers's Ginny. She actually has a female friend in this book, who is an actress, and this friend plays a significant role in the narrative. There are two women rivals in this book, both women of color, both also mistresses, but I feel like Eleanora's thoughts towards them - particularly later in the book - were more evolved than you typically see or expect from novels of this type. Both Juanita and Nina Maria were fascinating characters; I really enjoy seeing ambitious women portrayed in fiction. Eleanora wasn't quite ambitious but she could be cunning, and even cruel, and I really liked that, as well.

I bumped this one up the old priority list because I remembered one of my friends, Whiskeyinthejar, telling me that this was her favorite Jennifer Blake book. I can see why. It's an epic, well-written romance featuring a cruel hero with a hell of a redemption arc, an interesting heroine who goes through some very terrible things and strange adventures, and a really rich and vibrant setting. If you think you can stomach the dubious consent, you should definitely pick up this book. It's action-packed and darkly romantic and breathlessly exciting and I'm already planning my next Blake read.