The Magician's Nephew by C.S. Lewis 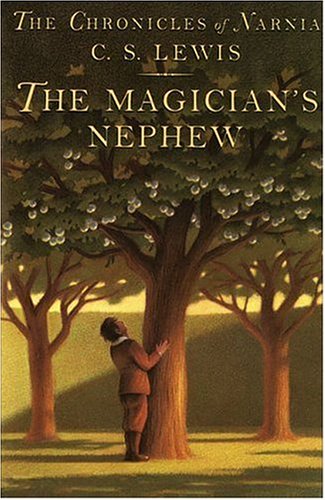 My mom used to read me THE LION, THE WITCH, AND THE WARDROBE when I was a little kid. I had always assumed that that was where the story began and it wasn't until fairly recently that I'd learned there was a different order to the books apart from publication order, where you could read them chronologically, in the order that the events within happen in the Narnia universe.

THE MAGICIAN'S NEPHEW was the second to last book published but is the first in the chronological order to the series, and by sheer luck, I managed to pick up the entire series as reprinted by HarperCollins and for some reason they decided to number the books chronologically, so this book is #1. Confused, yet? Don't worry, I am, too. I actually think that THE MAGICIAN'S NEPHEW is a really cool place to start if you don't mind a few minor spoilers because it's in this book that you learn about the origin of not just the Witch but also Narnia herself.

This book stars two Victorian-era children named Polly and Digory, who despite their different sets of circumstances, go from being neighbors to being friends and exploring, as children like to do. Digory's uncle is a Grade-A creeper, though, and forces the children to become unwilling participants in his magical experiments, which ends up taking them to several different worlds. The use of "dust" and the idea of the multi-verse being accessible through magic gave me strong His Dark Materials vibes, and I thought fondly back to my first pleasurable reading of Phillip Pullman's GOLDEN COMPASS. I'm almost certain that he was inspired by this book in particular, and I was surprised by how chilling Charn was, and how haunting the last page of this book was, when everything is brought full circle, leading quite neatly into THE LION, THE WITCH, AND THE WARDROBE (or, if you're reading in publication order, providing a nice callback to the events of the actual "first" book).

Really, I think it says something about how these books were fleshed out that the reading order is so flexible and still makes sense, despite being read in various orders. Now that I've finished THE MAGICIAN'S NEPHEW, I think I prefer starting the books in chronological order because the back story this one provides is so rich and good. Polly was a great character and Digory is one of those selfish characters redeemed, rather like Edmund or Eustace from some of the earlier Narnia books. You also get to learn the Witch's name, and it's funny; she sounds like a Sailor Moon villain.

I'm really glad I picked up these books and finally got around to reading them. They're YA and sound like YA, but once you can get over the way the narrative sometimes talks down to you, the story-telling is very good and will make you so nostalgic for the times when you were a kid and still believed the veil between fantasy and reality was so much thinner than it was. I won't tell you how many times I hopefully, and sadly, worked my way into the back of my own closet and pressed against the wall, wishing it would transport me into a world of endless winter filled with centaurs and talking animals and magic. Alas.