Whisper of the Moon Moth by Lindsay Jayne Ashford 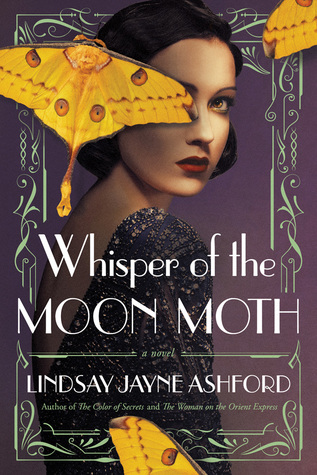 WHISPER OF THE MOON MOTH is a fictionalized account of real-life actress, Merle Oberon, who acted alongside actors such as Laurence Olivier, Flora Robson, and Vivien Leigh.  She was also half-Indian in a time where there was still a ton of racism towards people of color and something called the Hays Code forbade the portrayal of miscegenation or interracial relationships. So, you're probably asking, "How did she do it?"

Since this is a work of fiction, there's obviously a lot that deviates from real life, and Merle was so successful at hiding her origins that I don't believe the truth about her ethnicity came out until 2014. There isn't a whole lot of material to work with, so the author takes a ton of liberties (which she is very upfront about in the "epilogue" where she lists out all of her embellishments).

WHISPER OF THE MOON MOTH is very much a Cinderella retelling of the kind that's so popular in books of this type, in the vein of MEMOIRS OF A GEISHA. Merle, born Estelle Thompson, is the daughter of an Indian mother and a white father, living in an India that still has a rigid caste system, where multi-ethnic children are basically outcasts from both white people and Indian people. There is one major upside for Estelle, though, and that is that she is gorgeous.

Unfortunately, her good looks and lack of worldliness cause a lot of trouble with men, and after getting her heart broken she decides to pursue her dream of acting by going to England with her mom. In England, she has to hide who she is and pretend her mother is her servant. Luck ends up landing her first an audition, and then things like roles and later, an agent, and pretty soon, Merle Oberon gets cast as Cathy in an adaption of Emily Bronte's Wuthering Heights.

There's a lot of Hollywood drama, but it's super fun. I'd say that if you read THE SEVEN HUSBANDS OF EVELYN HUGO, and asked yourself, "What's next?" WHISPER OF THE MOON MOTH would be a good follow-up, because it also balances the weighty topics of race and sexuality against the backdrop of superficial but intoxicating Hollywood glamor. SEVEN HUSBANDS did it better - because, I mean, let's face it, that book was perfection - but WHISPER OF THE MOON MOTH is a page-turner, and just serious enough to avoid the "frothy" label. I really enjoyed it.

FYI, just want to give props to Lake Union Publishing. Whoever curates their historical fiction finds does a really excellent job. I've read a number of their titles and don't think I've ever encountered one I did not enjoy. This one was no exception.