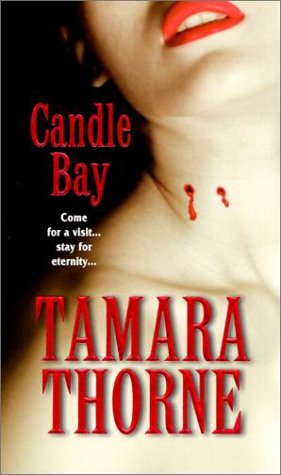 This book is a tease - it is all bark and no bite, and when I'm reading a book about vampires, I want allllll the bite, baby.

I love books about vampires, particularly vampire novels published before TWILIGHT. For better or for worse, TWILIGHT was a game-changer for the vampire subgenre, removing them as figures of horror and placing them firmly within the camp of other romance heroes. I've read some excellent vampire romances, but part of me - the dark part of my soul that comes alive at night - yearns for those sinister figures of yore, who were less interested in kissing and pining on about their eternal loneliness and more about the BITING. YAS.

CANDLE BAY was published in 2001 and even though it has romantic elements, it's definitely more horror than romance, and anyone picking it up expecting romance is going to be disappointed. The premise is pretty unique. Amanda Pearce is a newly hired concierge at a clubby hotel and spa near San Francisco. She's always been attracted to Gothic horror and things like vampires, so the misty, reclusive resort really appeals to her romantic sensibilities - and so does her tall, dark, and handsome employer, Stephen Darling.

The Candle Bay Hotel and Spa is managed by the Darlings, who are all very good looking - and all vampires. There's Orion, who fancies himself the next Godfather; Natasha, the femme Dom who likes to work hard and play hard; Stephen, the brooding romantic; and the evil twin daughters, Lucy and Ivy, who swing both ways and are completely psychotic and out of control. Living with them is another vampire named Julian Valentyn. Unlike the Darlings, Julian was BORN a vampire and not MADE - something that puts him a cut above the others, and which he doesn't fail to lord over them.

In addition to a "Will they/won't they?" between Amanda and Stephen, there's also a bit of a love triangle between Amanda and Julian, because Julian feels a connection to her due to events in his past. Those events make up the bulk of the plot driving this story forward because there's something hidden in the tunneling basements beneath the Hotel, and that something is alive.

CANDLE BAY is not a short read and it went on for way too long. There are many pointless asides that bog down the narrative and all of the sex scenes are disgusting. I don't mean disgusting because of gore (although that too); I mean disgusting because of how they are written. I'm hoping to post this review on Amazon, so I must refrain from posting salacious content, but please check out some of my Goodreads status updates for a "greatest hits" recap of some of the choice sex scenes in this book.

I also feel like there wasn't a lot of payoff. I was expecting hotter scenes between Amanda and Julian and Amanda and Stephen. The only people having sex in this book for the most part were secondary characters, which brings me to my next issue with this book: EVERYBODY GETS A POV. This is exactly why I didn't like Paula Hawkins's new book, INTO THE WATER - if there are too many people running around, it's harder to become invested in any specific person and they all start to blur together after a while. To her credit, Thorne gives all of her characters distinctive personalities (which Hawkins did not), but this makes the blurb seem misleading, because you think that it's going to be all about Amanda and Stephen getting it on, when in fact it is not.

Also, this is the SECOND vampire "romance" I've read with an Atlantis connection, and yes, it is just as ridiculous as what FOREVER AND THE NIGHT tried to do. At least this book didn't involve angels. Seriously, if you ever want a laugh, check out my review of FOREVER AND THE NIGHT.

I feel like I should give this book a low rating but can't quite bring myself to. I was vastly entertained by CANDLE BAY and couldn't put the book down. Even the terrible sex scenes were incredibly entertaining. This is basically the Bertrice Small of vampire novels - it's disturbing and badly-written, but the story is such a compelling train wreck of a mess that you can't bring yourself to look away.

Thanks to Heather and Karly for joining me in this BR!

P.S. The Chelsea Quinn Yarbro reference in this book was A+