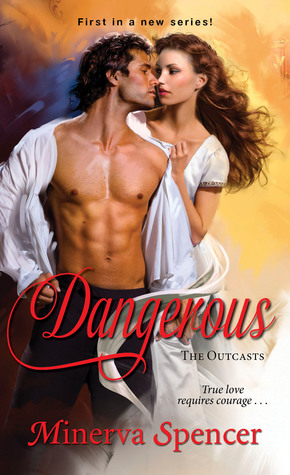 💙 I read this for the Unapologetic Romance Readers' New Years 2018 Reading Challenge, for the category of: "I Picked It for the Cover!". For more info on this challenge, click here. 💙

Disclaimer: Minerva is a Goodreads friend of mine. She did not, however, solicit me to read and review her book. I found the title on Netgalley and, recognizing the name, decided to check it out.

The cover of DANGEROUS leaped out at me immediately because of the cheesy, 90s romance-style cover, hearkening back to the days when every other hero was cast in the puffy shirt mode of Fabio, and poor photo shop led to some questionable aesthetic decisions.

Likewise, the premise of this book also seemed like it was going to be a throwback to the Bertrice Small school of writing. The heroine, Euphe(mia) Marlington, was kidnapped by pirates when she was a preteen and sold as a slave to a sultan's harem.

Now an adult in her thirties, she finds that the starchy English society isn't really prepared for her like. Her peers snub her, and creepy older dudes want to have their way with her, but nobody really wants to take her as a wife - and they'd want her even less if they found out about her adult, biracial son who's currently in the middle of a power coup in Africa.

Her father (who also has no idea about the son) decides to take matters into his own hands and throws an elaborate party where Mia is supposed to choose one of the men assembled for a husband. They're basically all the utter dregs of the well-to-do, except for a certain cold-eyed marquess named Adam de Courtney, who allegedly murdered his previous two lives and lives in infamy in his manor.

Neither are what they appear to be, but both feel an instant attraction as soon as they see each other.

Wow, I was really impressed by this book! It's like a modern upgrade to everything I love about bodice rippers - steamy sex scenes, globe-trotting adventures, pirates, seafaring expeditions, naughty harem hijinks - but with a modern, PC-friendly twist. DANGEROUS is very sex-positive, in my opinion, and the hero is the perfect blend of stern alpha with a caring side and icy bad boy.

AND DID I MENTION THE SEX SCENES?

Her writing style really reminds me a lot of Meredith Duran's, so if you're a fan of the Rules for the Reckless series, this might be a good book to pick up next. The only shortcoming was Mia's sequence of third-act TSTL decisions and some fights that felt pointless, but at least these characters actually talk about their problems instead of dancing around them endlessly like Julia Quinn's characters.

It's very refreshing to read a book where the characters actually enjoy talking to each other.